Yes! This was a good year to be at Spiel in Essen. Even if there wasn't a great game to swoon about, and even if we had a last minute cancelation (with Douwe as a great substitution) and others were experiencing distractions form real world troubles.

The new layout in the three halls and galleria was an improvement. It felt more spacious even though there were more people than in previous years (according to the Spiel website).

I must say I was also pleasantly surprised this year with effort made by most demo people. The Poles have made a great effort over the past years, but there were more examples of passionate people trying to win you over. For example the guy at the La Mame booth who really knew how to sell Coup to me. Rare to see such enthusiasm. Small designers tend to take all of that burden upon themselves, but demo people can be worth gold, if only to relieve the pressure.

So, what about the games? I´ll start my report with impressions of the games I didn´t get to play. Next will follow my experiences of the games we did play. The Polish games will be in a third and last post.

Some neat balancing mechanisms in the deck management of Kampen om Norge were explained to me by one of the designers, who hung around the Spielbär stand. The Germans have to win 6 victory positions before their deck runs out, while the Norwegians can reshuffle if they want. The Anglo/French also have a limited deck.

It is only because I can’t be fooled into buying another 2 player wargame that I didn’t buy it, but this game genuinely seemed to tackle the most difficult campaign to wargame: 1940. It combines sea, air and ground troops, in a very big area. It is probably hideously expensive to order it from . So it will probably never gain a wider audience. I think that’s a shame. 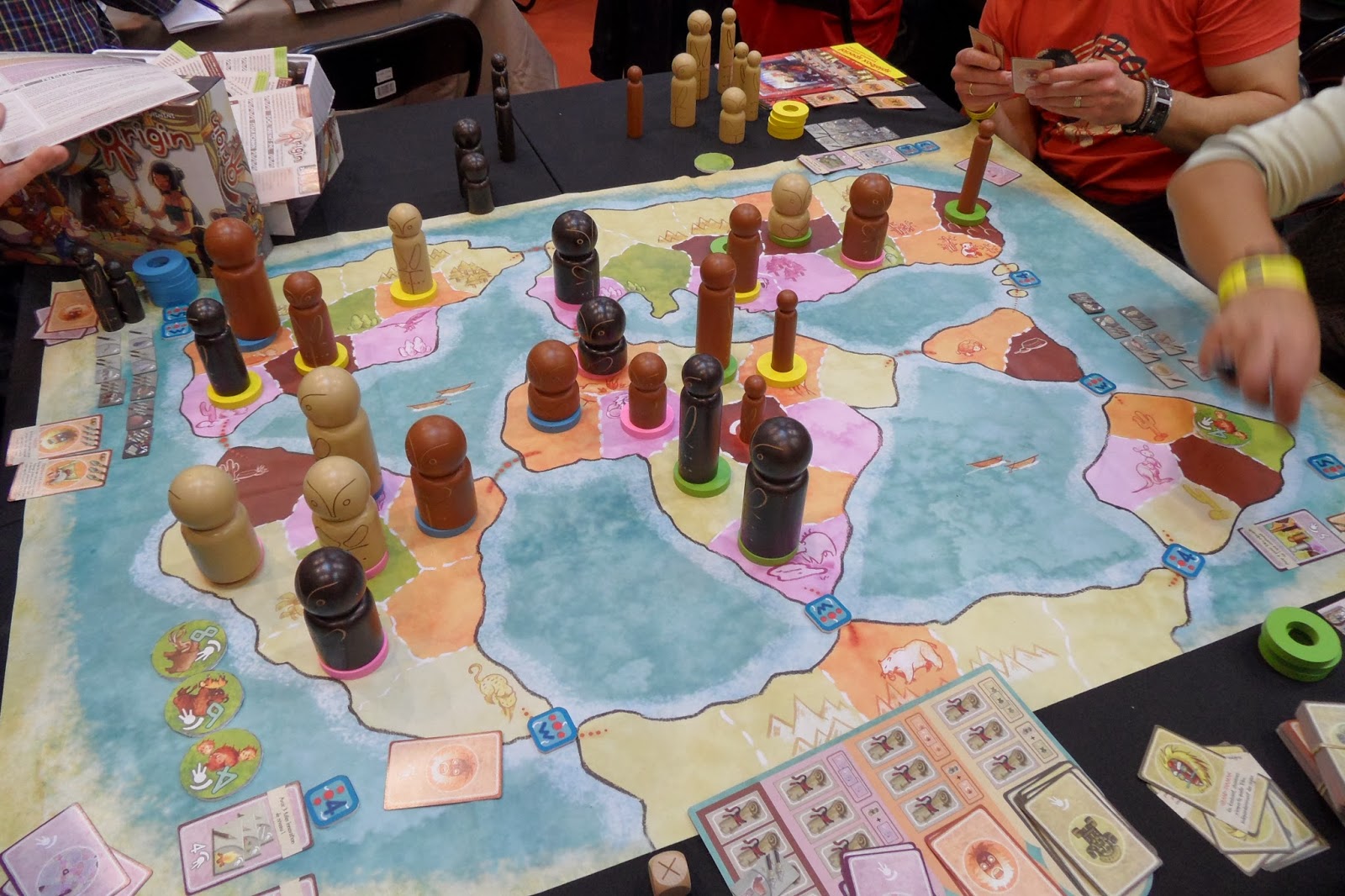 Origin from Matagot is a civ game, where the shape (length, colour and thickness) of your figures determines their characteristics as you expand over the world. Didn’t hook me though. 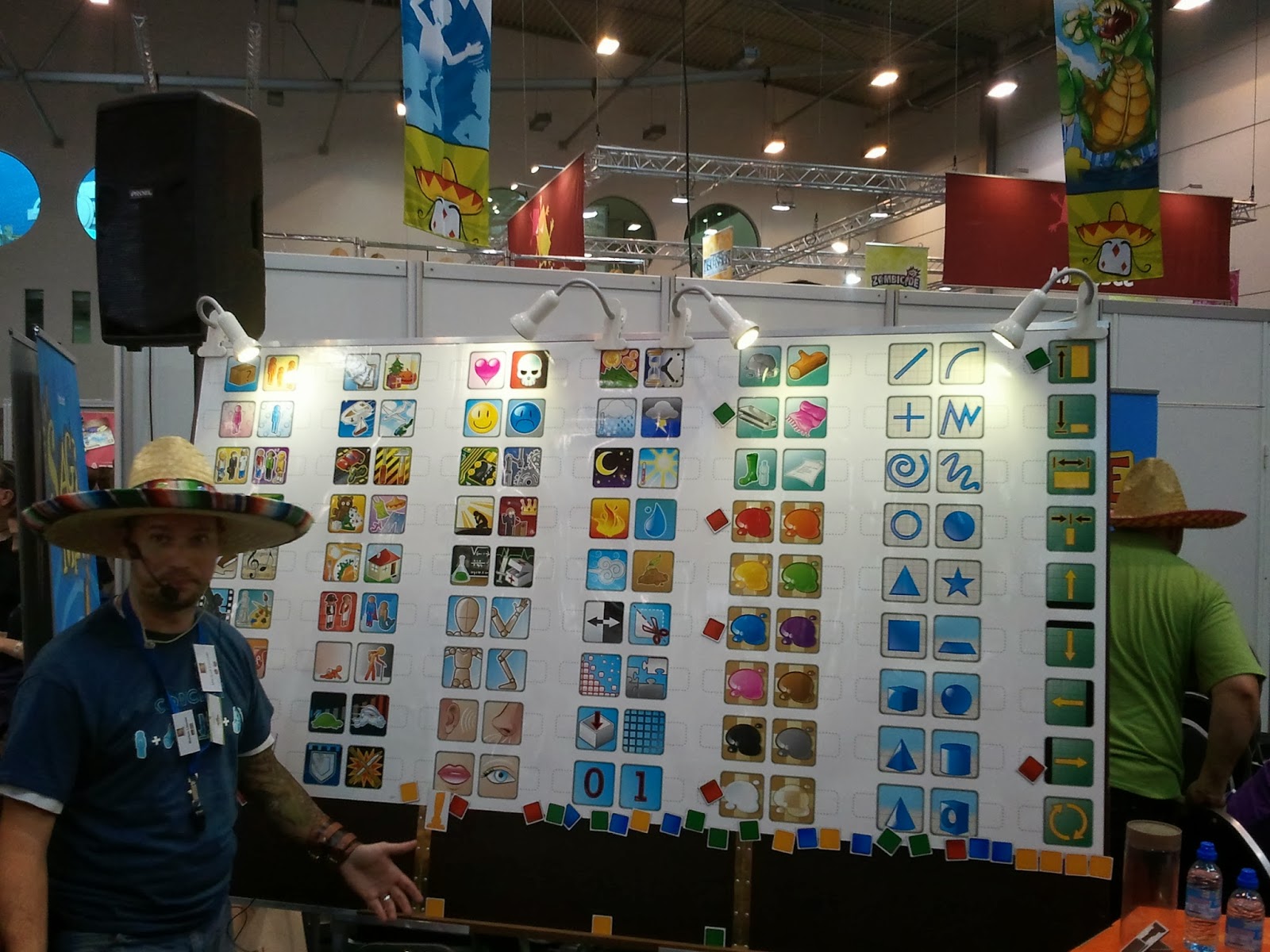 Concept from Repos is in the line of guessing games such as Pictionary, but here you have a board of images that helps you to describe your subject. There are hardly any rules in the box and very little stuff. It’s just that I am fascinated by communication between different cultures and the problems of translating abstract concepts, so I bought it anyway. My friends tried Uwe Rosenberg's new game Caverna, and it is mostly an easier, fantasy version of Agricola. Resources are not so tight.

Canalis from AEG continues the Tempest series. It is a tactical tile laying game. 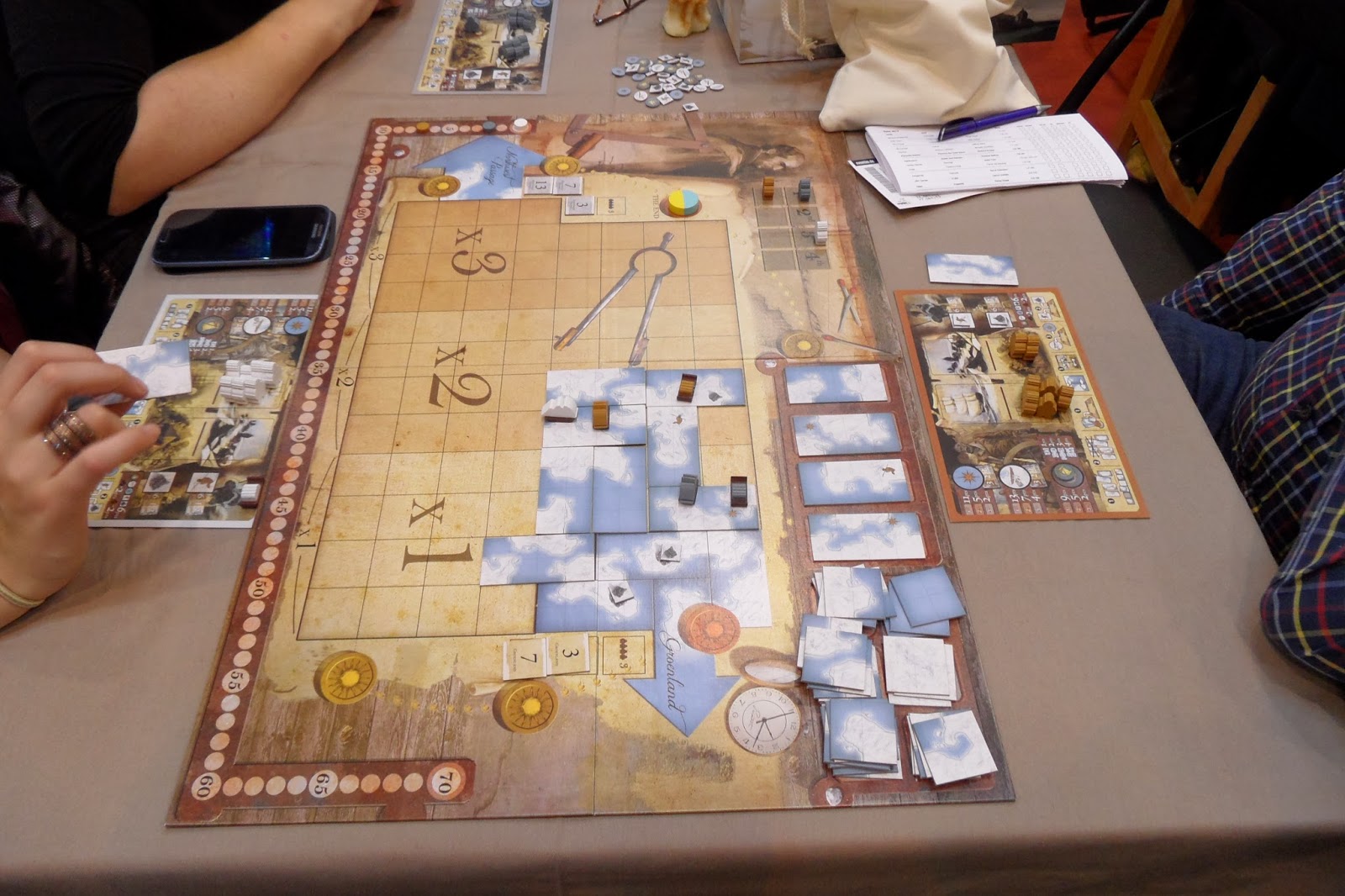 from Matagot looked interesting, with the retreat and advance of frozen ice driving the players on... or back. It’s tile laying and action taking. I would have liked to try this. 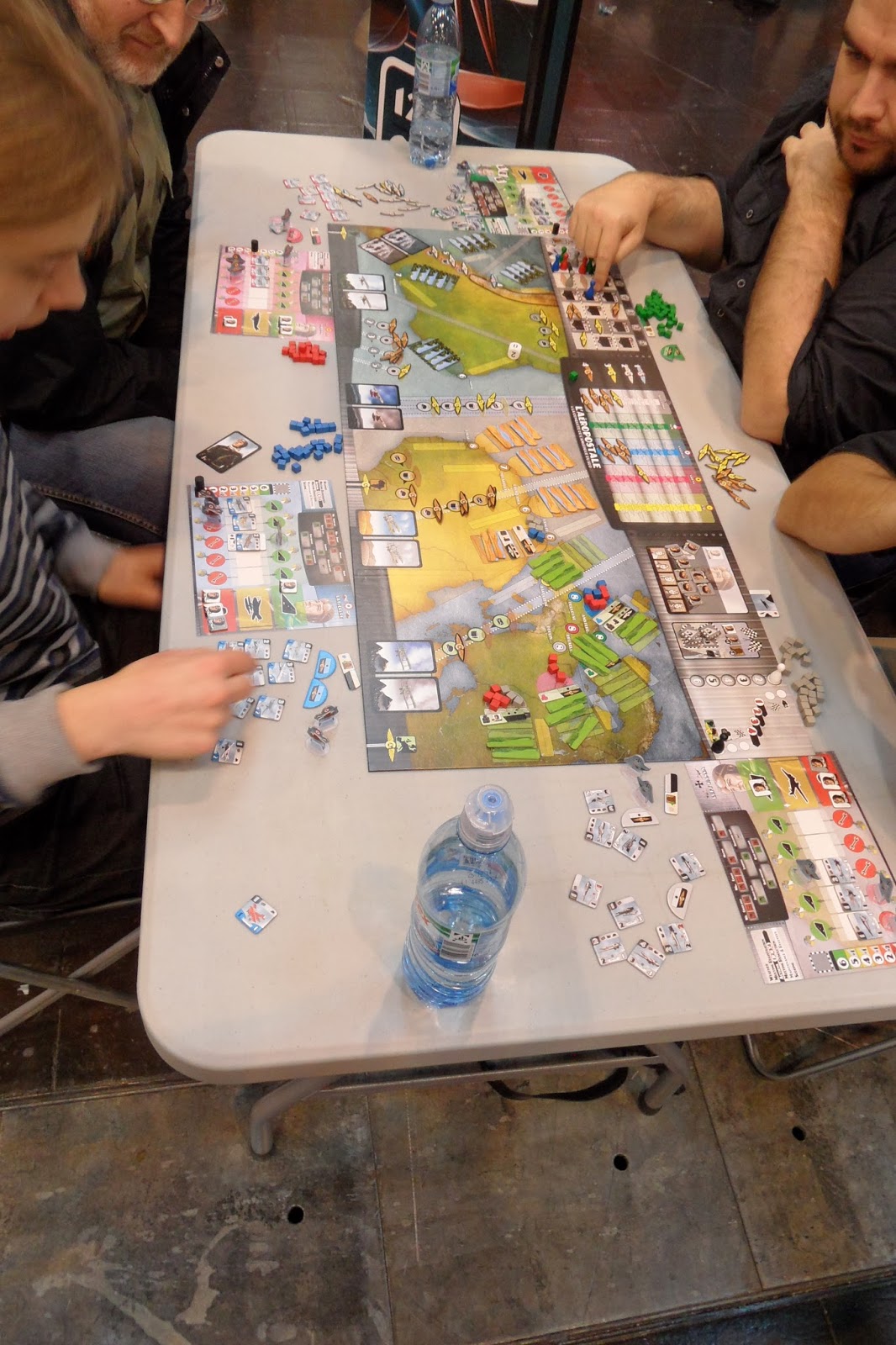 The guy at the Asyncron stand did a great job explaining l'Aeropostale to me. You run one of the first airline companies to encompass the world in your network of postal and passenger services. Nice theme & artwork, but would have liked to try it. That might have clinched a buy.

Hard to figure out why was making such an impact. It looked like the next ‘trade to impress the prince’ game. We couldn't fit into a table to try it. Probably for the better. 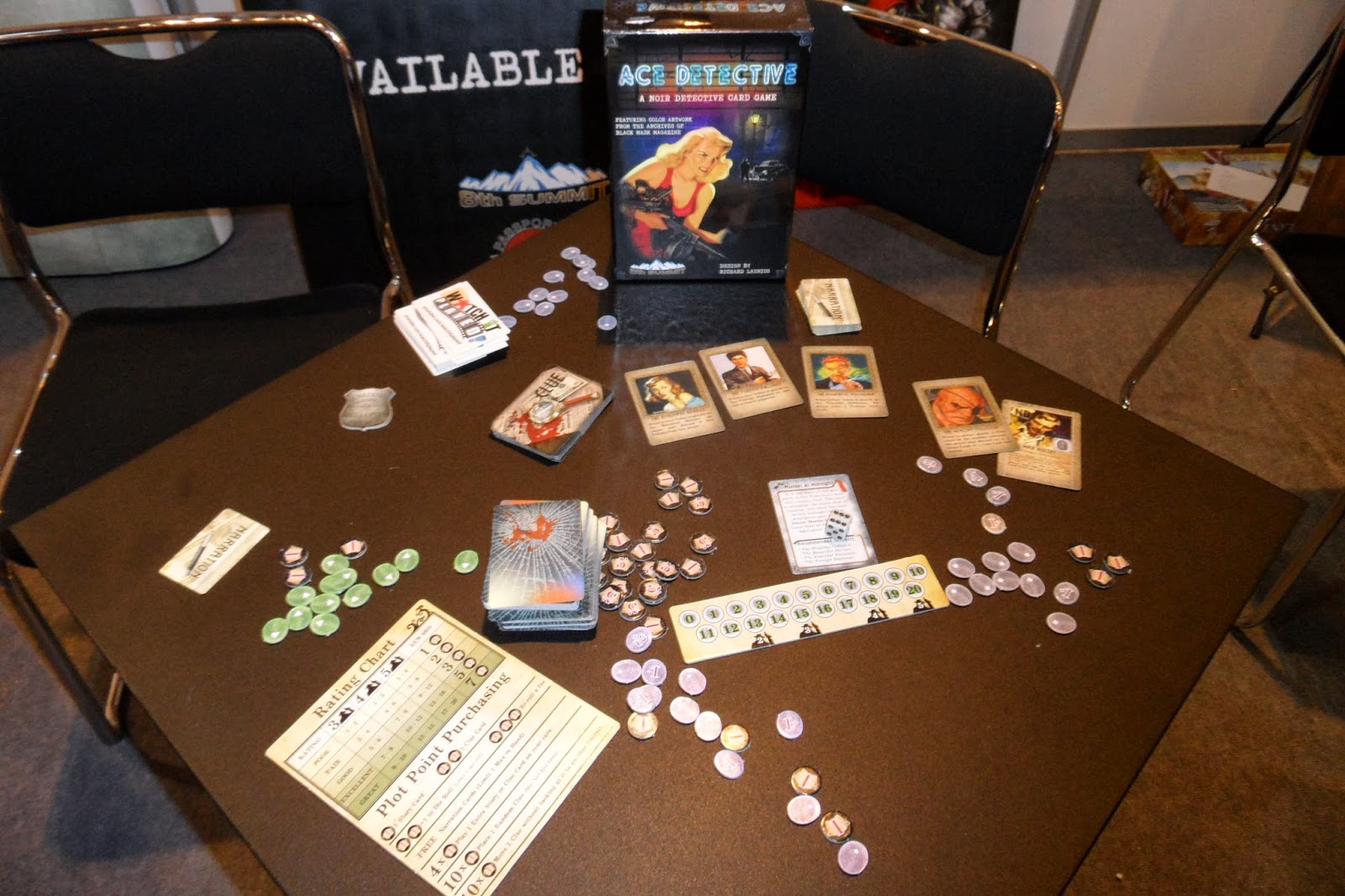 I only had a quick look at Ace Detective by Richard Launius. The investigation issue is dealt with by you putting the most clues on the suspect with the most clues at the end of the game, a mechanism we also saw in Android. The story-telling aspect is just the optional addition of players rewarding each other for story telling and this is also a well known mechanism. But both mechanisms have their weaknesses and didn’t fire me up to come back and find out more.

Had Suburban Dispute explained to me, and the background story is interesting enough, but I just couldn’t see it being fun for the full length of the game (2-3 hours) 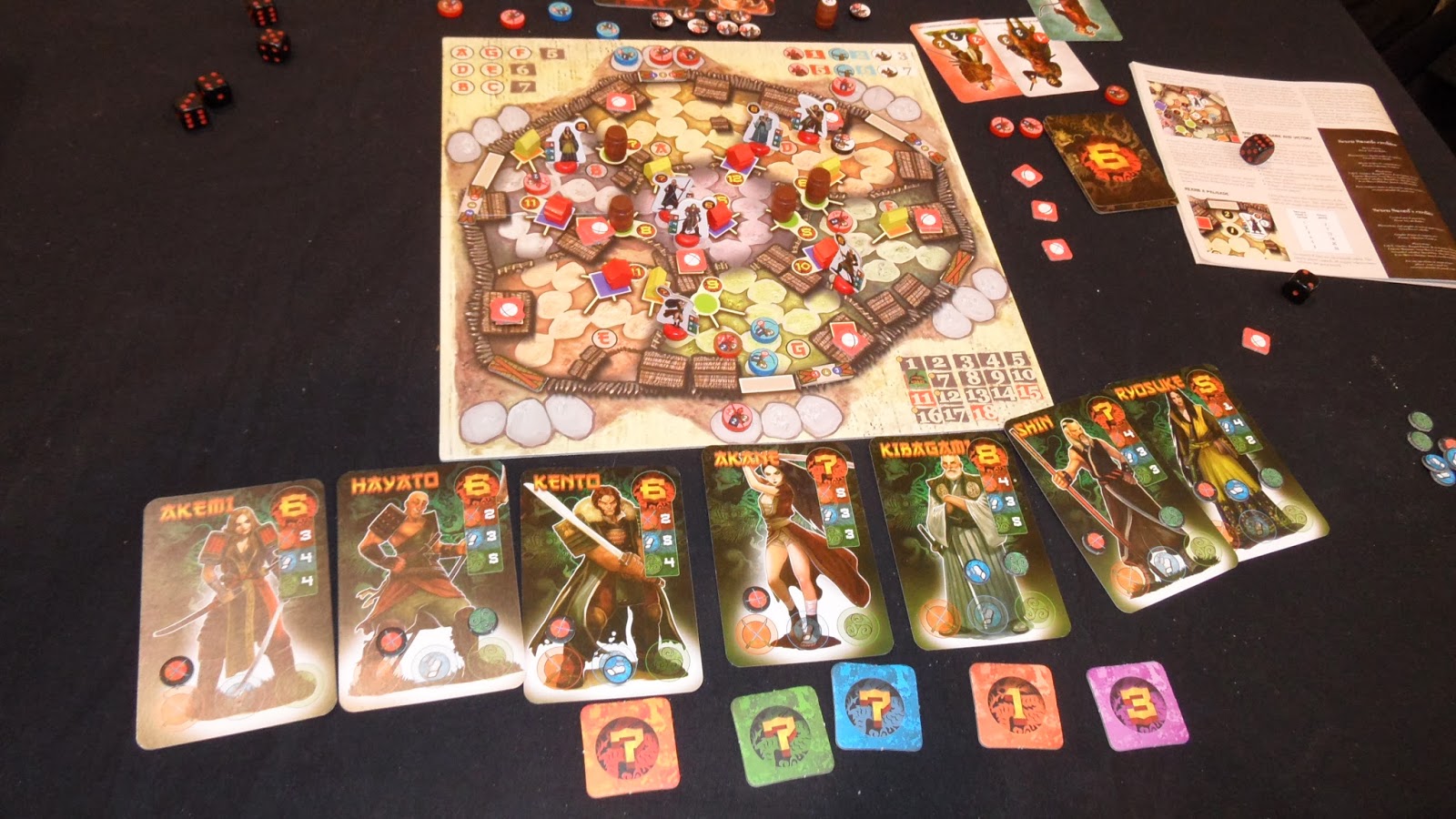 Seven Swords (based on the classic Kurosawa movie Seven Samurai) by Xenos looks good and sounds good. The mechanics are interesting and seem to create a nice dynamic and tactical options. However, I just fear that the rulebook will be as badly written as Luna Llena and others from this company. Guys, get your ffing act together! You have interesting themes in the Ameritrash genre, but if you can’t write a decent rulebook I just can’t bring myself to recommend you to others. Bloody shame!