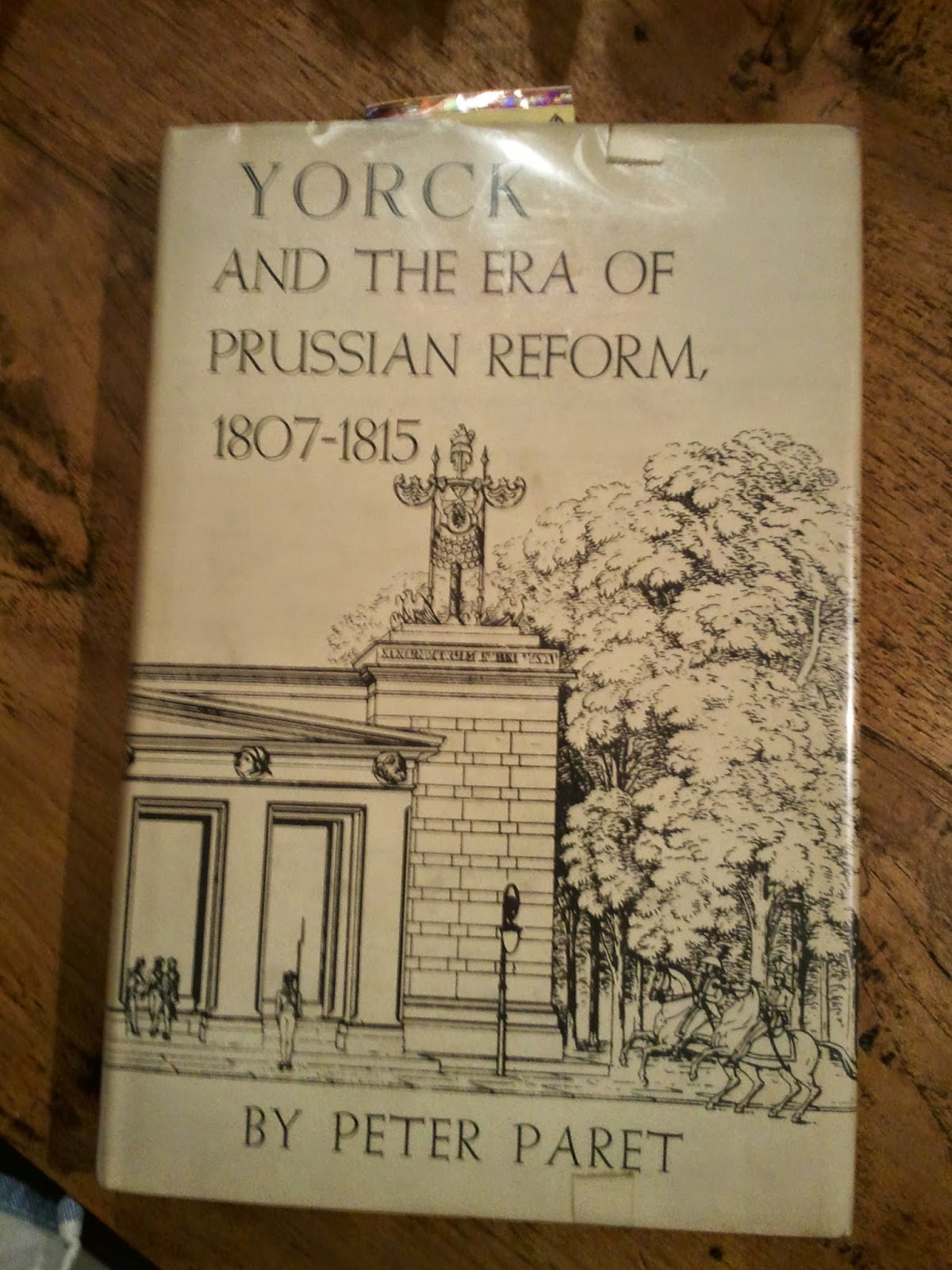 Great book on the Prussian reforms before and after Jena-Auerstädt. Shows that it was not just a case of noble and visionary reformers vs dumb reactionaries, but a struggle in which military theories and practice were linked to but also conflicted with legal privileges, social attitudes and personal rivalries.

Considering the opposition it is amazing how much was achieved and one wonders what might have happened if Scharnhorst hadn´t died so young and peace hadn´t come so soon. In any case, the reforms turned the Prussian army from a laggard into a front runner, despite the rough edges.

Yorck´s role in all of this is much more interesting than many historians have it (and that includes recent historians who have simply repeated the myths of the past). Yorck was in many ways closer to the reformers than most, looking at his practice as a commander of the Jäger and the infantry regulations and training programmes he helped to write. On the other hand, he was quite aware that the consequences of the social change not only undermined his status and legitimacy as a noble, but thereby also that of other institutions. And he was a pain in the arse to work with.

All this lovingly analysed and extensively researched by the author.

View all my reviews
Posted by Jur at 20:35 No comments:

I actually did some more modelling and painting!

Yes, it gets more unbelievable...

When I spray painted the Panther tank, I also went over two 1:72 Shermans I had assembled earlier for my US Army force for Chain of Command (look for a teaser at René's Paint-In blog, he's doing a great job again). 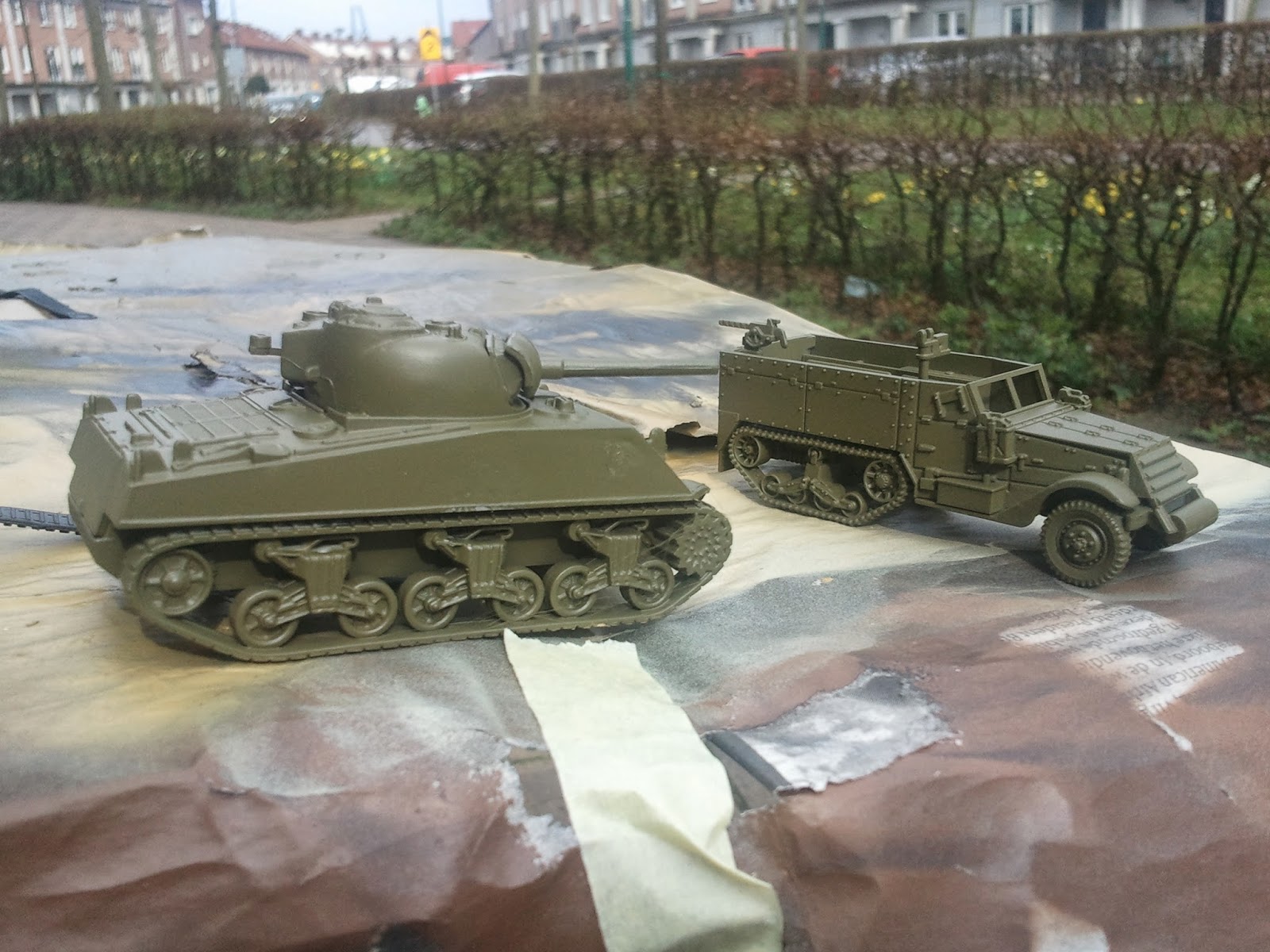 And three newly assembled M3 halftracks in different versions. I gotta admit I love those Plastic Soldier kits for ease and speed of assembly.

You won't believe it, but I also have three Stuart M5A1 sprues here that I just might assemble sometime soon. And a bunch of jeeps and a Buffalo.

Not making any promises though....
Posted by Jur at 15:54 No comments:

I actually did some modelling and painting 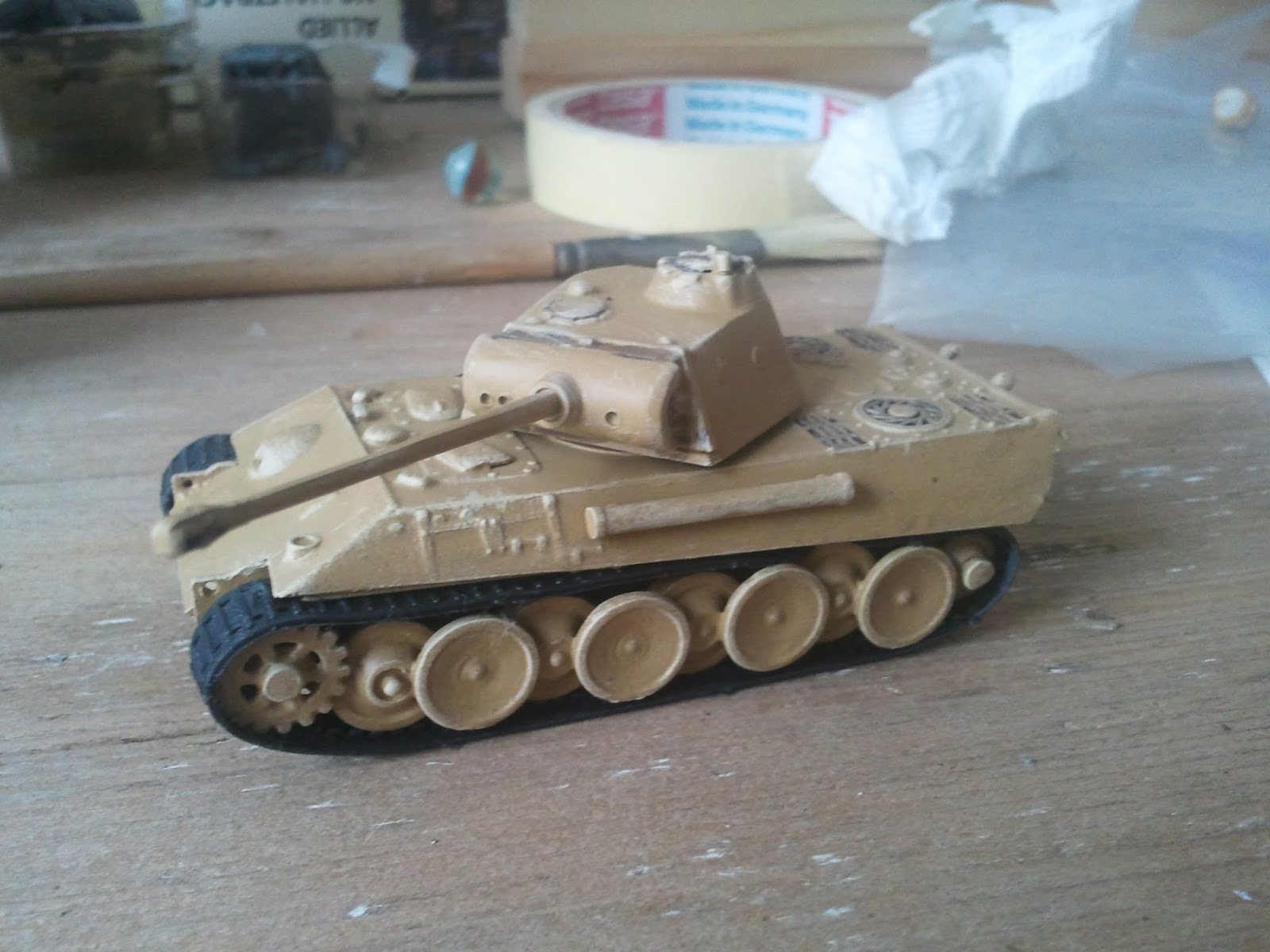 This goes contrary to club myth that I don't ever paint any miniatures and as we all know you shouldn't let the facts come between a good story.

The tank is actually not for myself, but a proxy gift to my great chum Michiel, a tank hugger if there ever was one. 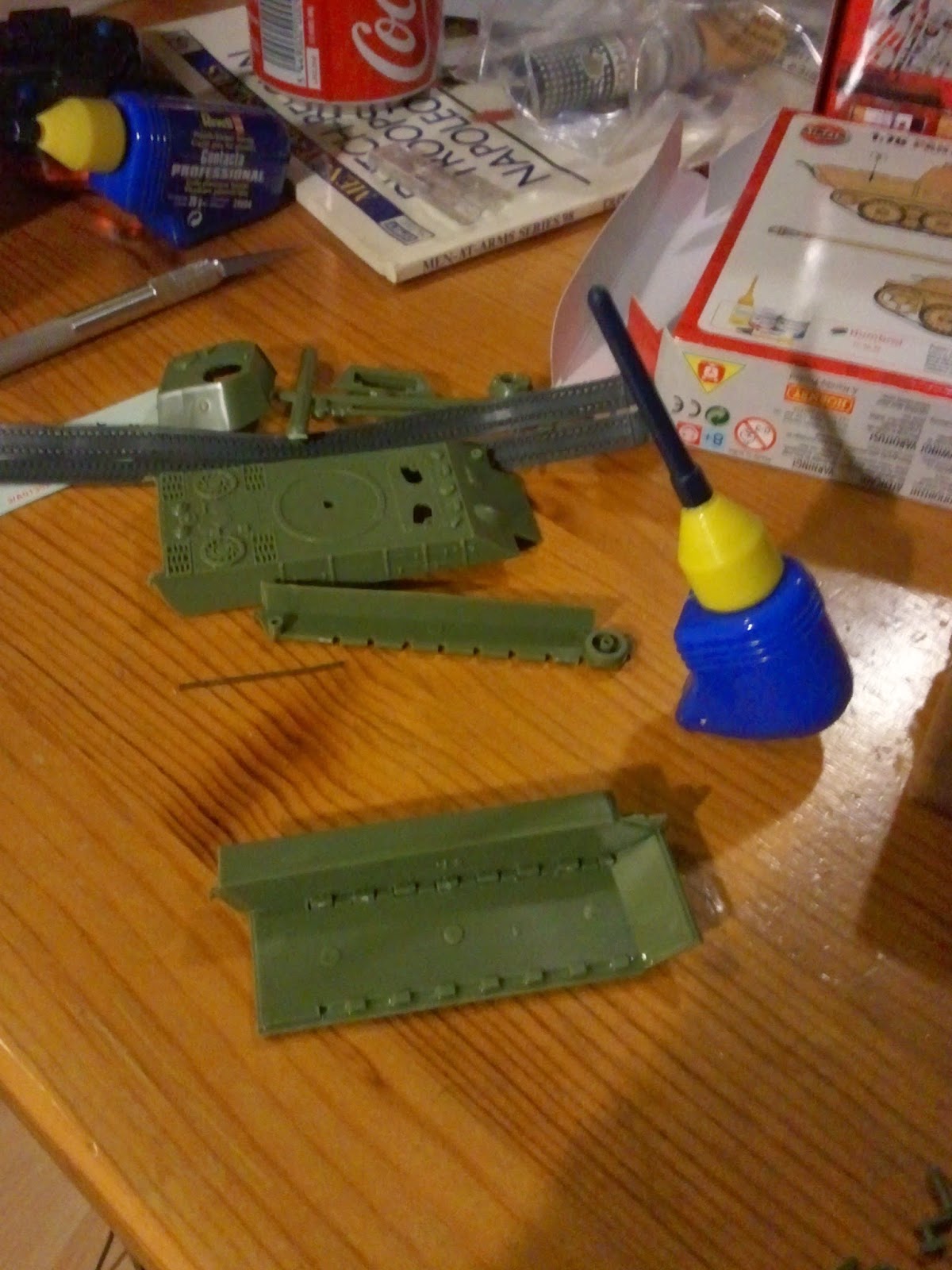 I had to assemble quickly to present the unpainted model at his birthday bash last Friday. 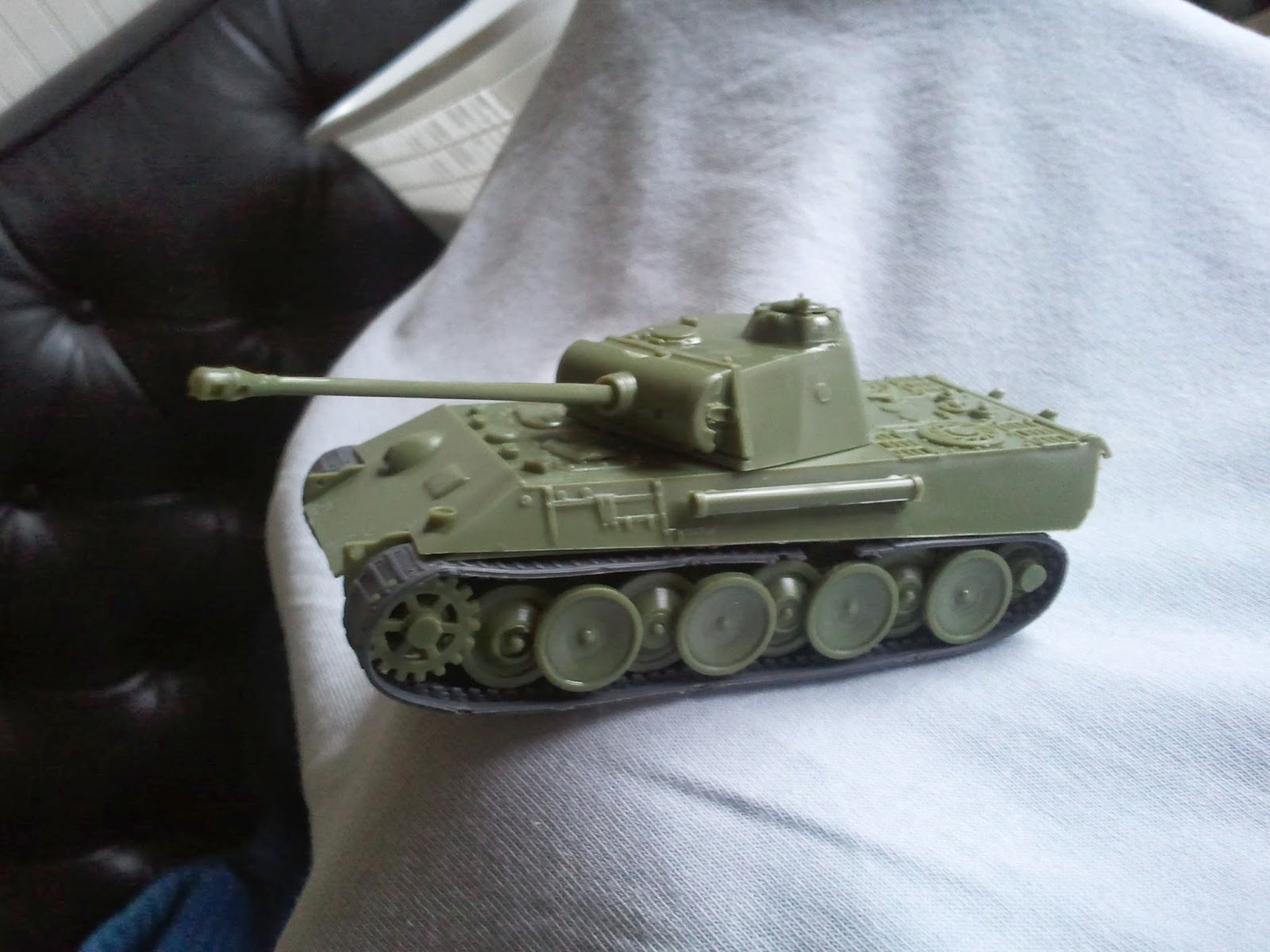 And this weekend I quickly snatched the opportunity to airbrush it. Yes, desert yellow is a cop out. But it's the thought that counts. 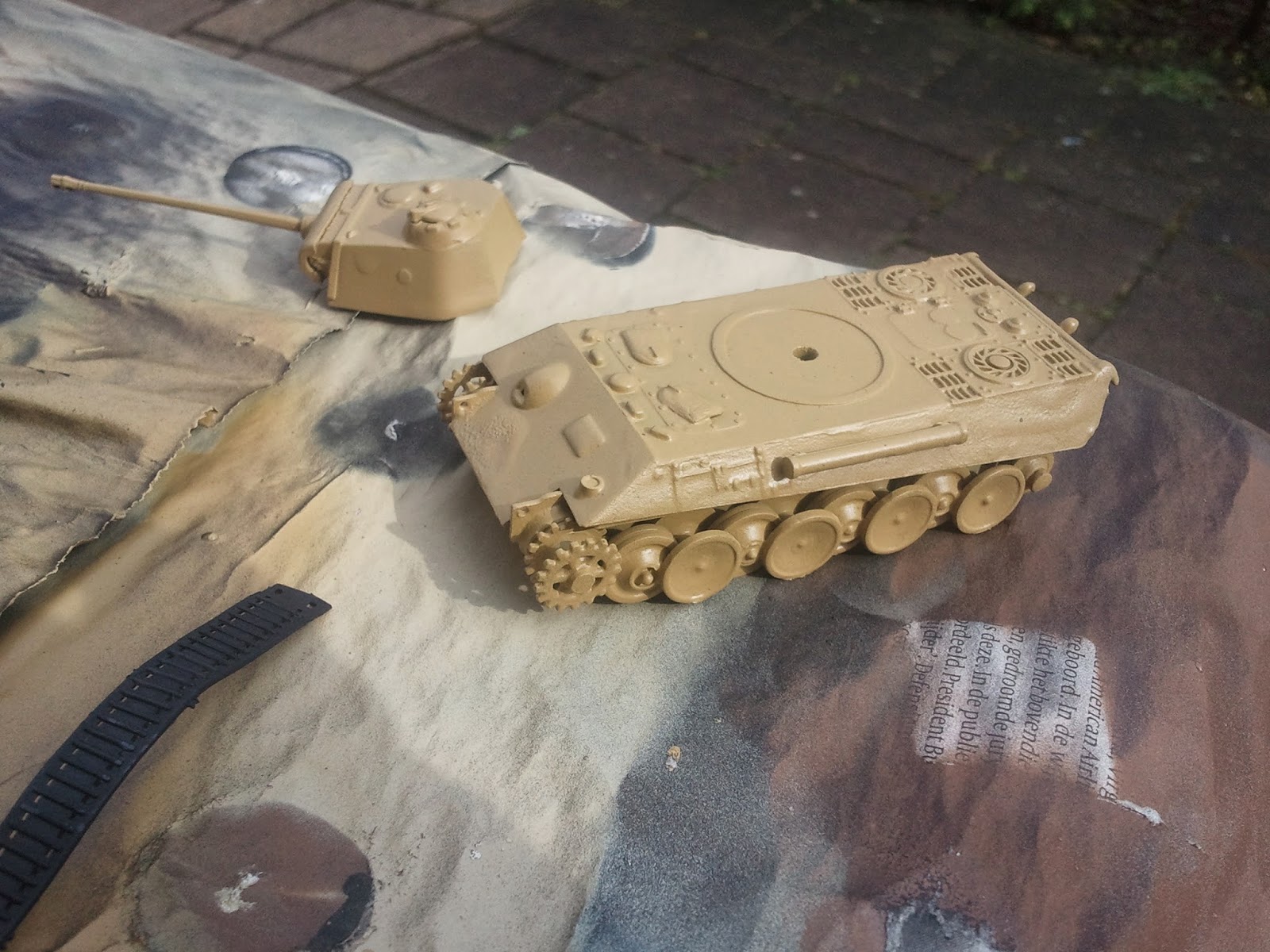 I even spray painted the tracks 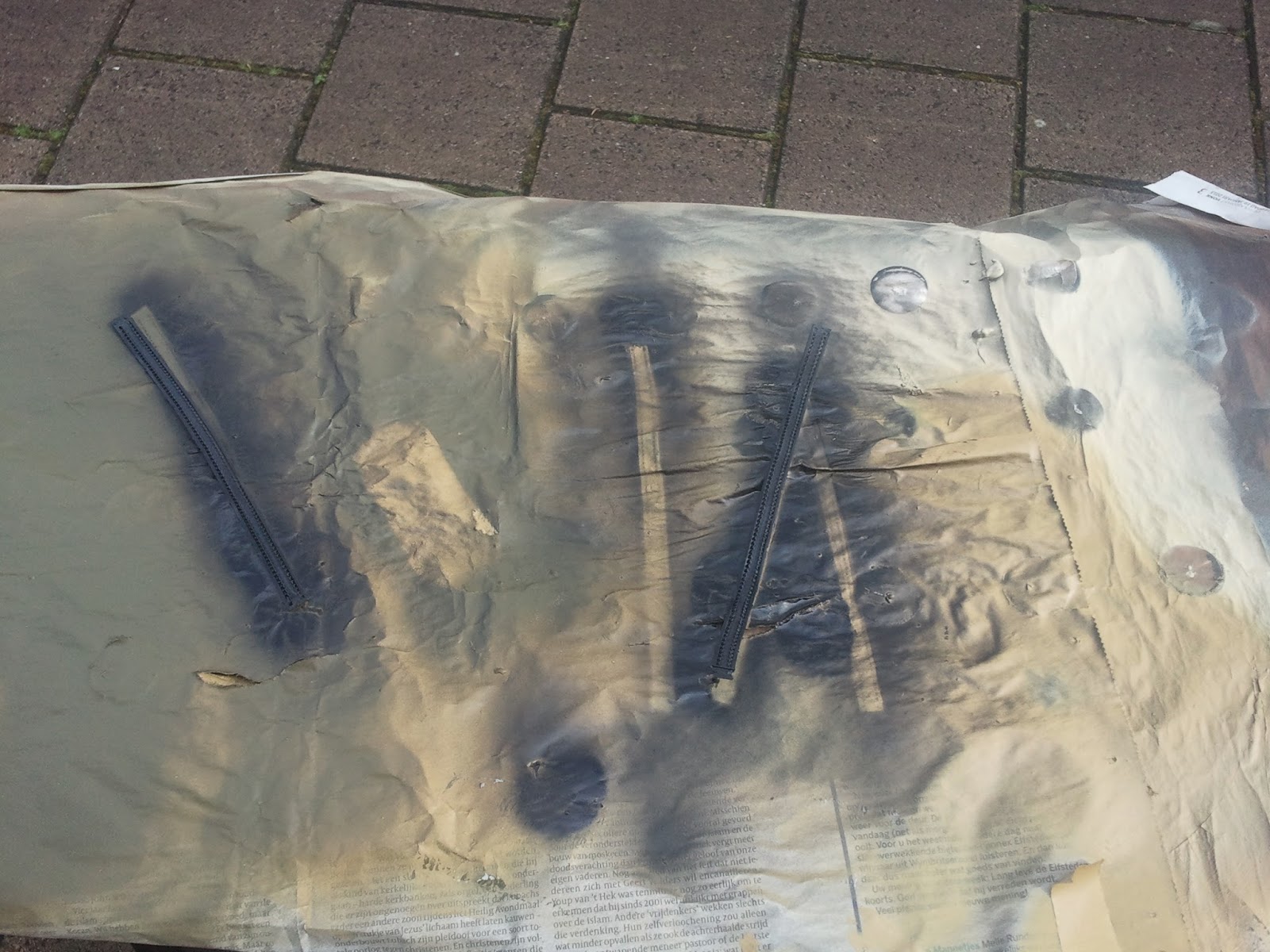 Did some dark wash on the rear grids. And a highlight. Which makes it look presentable, doesn't it? 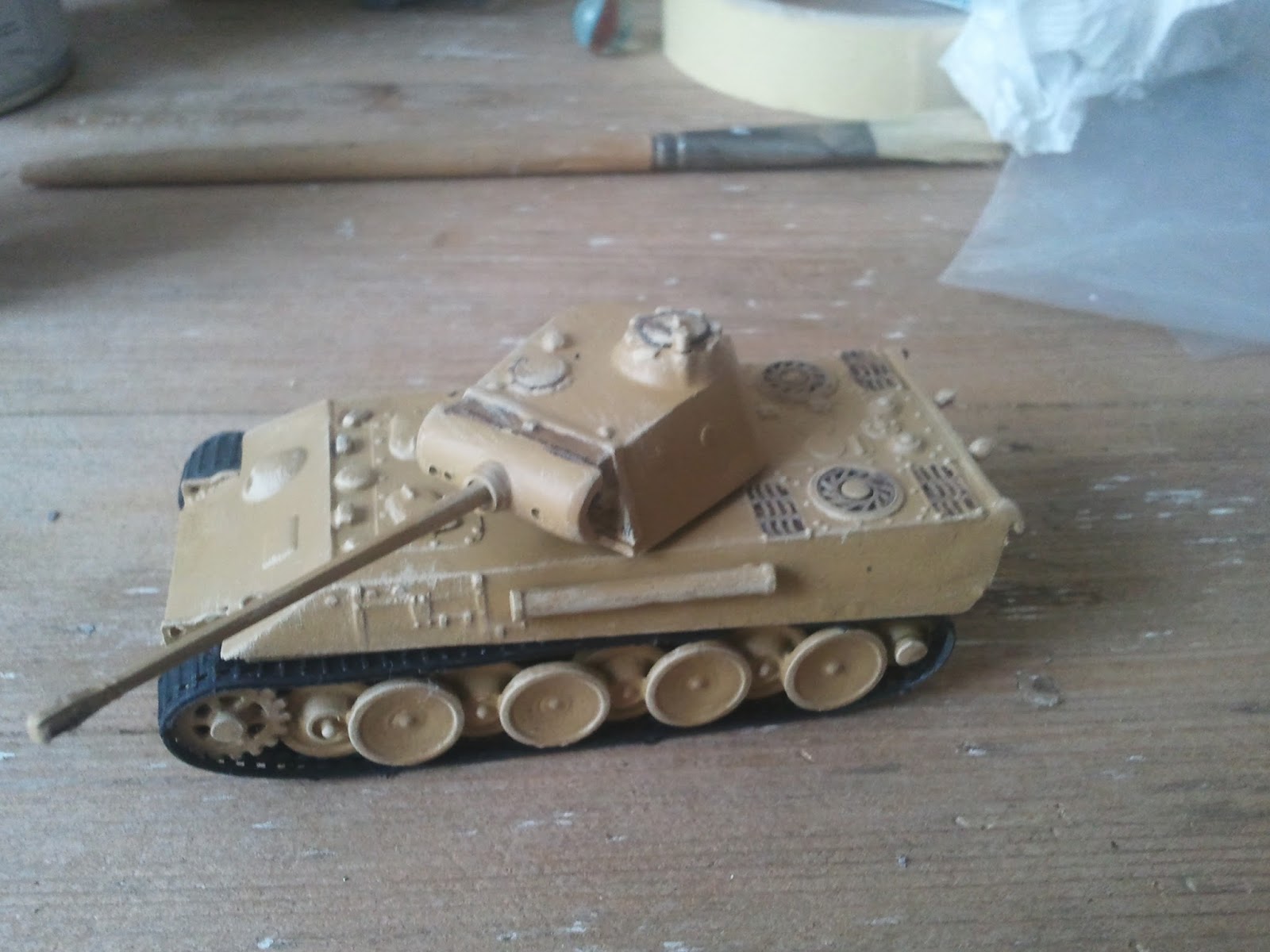 It's Official: I'm not a Witch!

Had a nice trip cycling from Woerden via Oudewater and Montfoort to Vleuten. Not only was it a beautiful sunny day, but this is classic polder country. 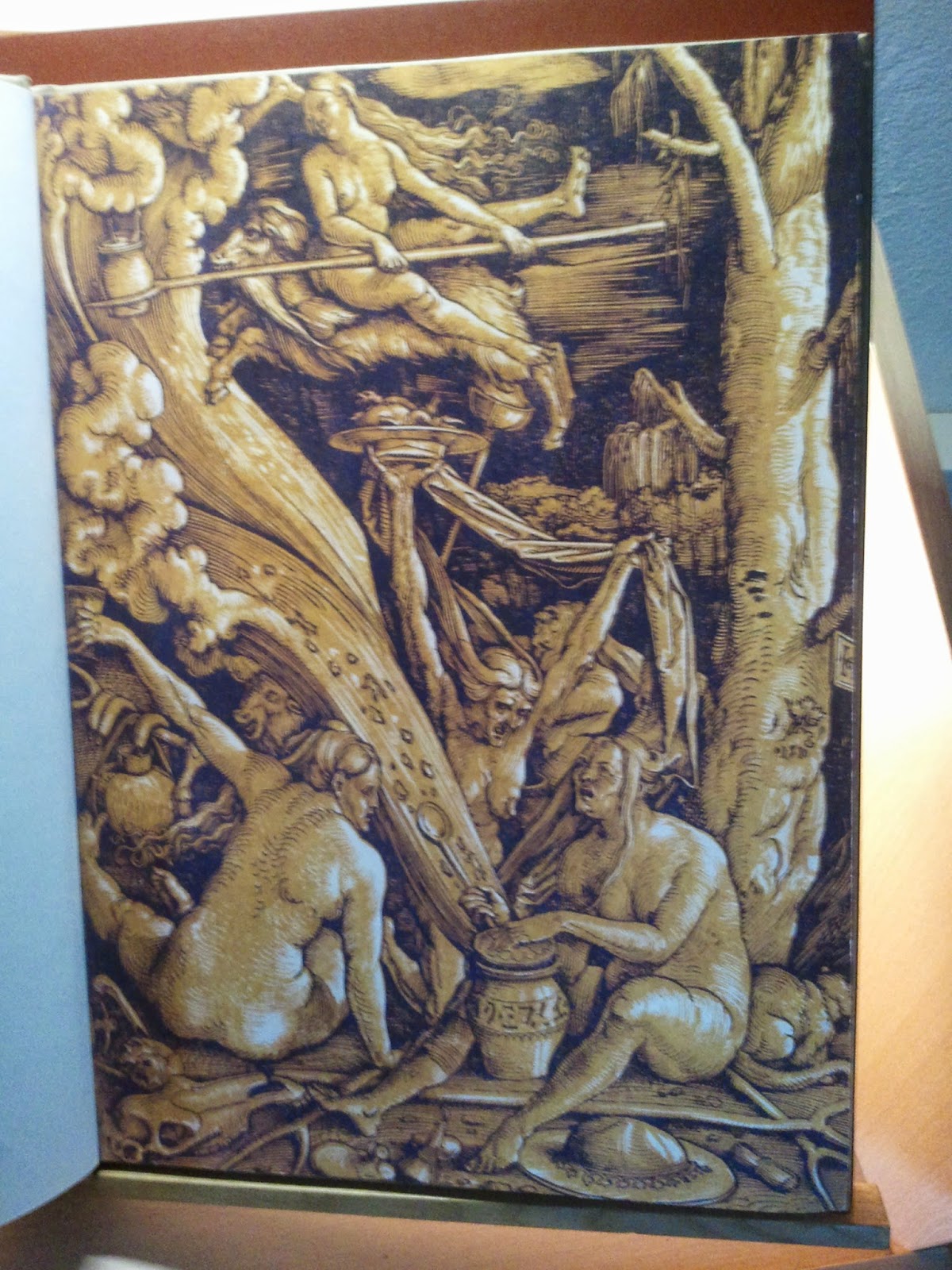 In Oudewater we visited De Waag, where goods were traditionally weighed before sale, but it is better known for its weighing of witches. The first recorded witch trials in the northern Netherlands stem from the 1540s, and de Waag probably acquired the privilege to weigh witches sometime after that. However, since you have to pay for weighing, this was only of use to the wealthy.


Although the coming of Protestantism helped in driving out the belief in witchcraft the last trial in the northern Netherlands was in 1614. But in the year before several dozens of people had been killed during a trial in Roermond. The last official weighing was in 1729 but it is still done for visitors. The museum has a small but engaging exhibition on witchcraft and trials. 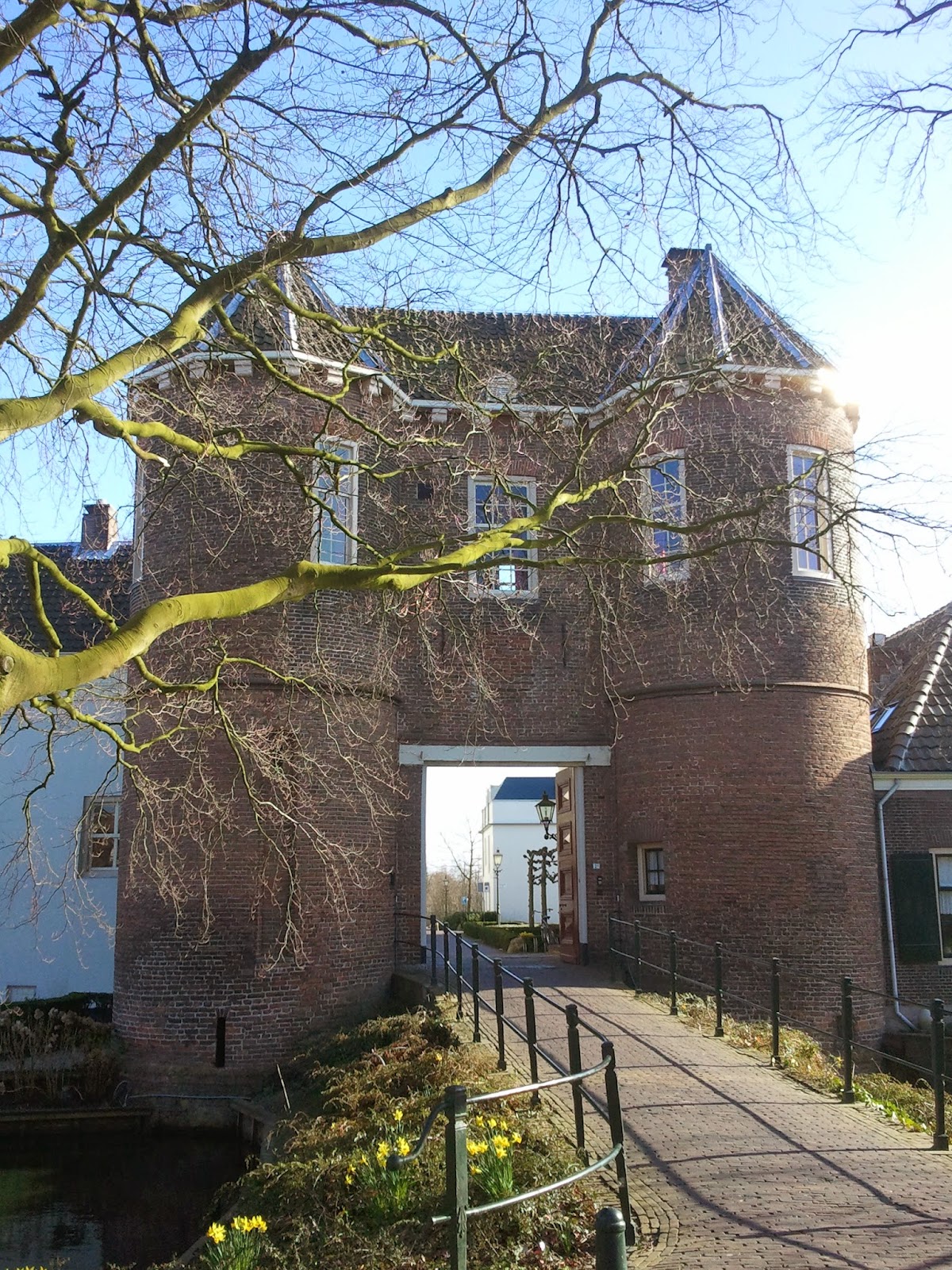 From there on to Montfoort where with some luck we ran into the gate of the former castle of Montfoort. The castle was destroyed by the French during one of their attempts to break into the Water Line (oude Hollandse Waterlinie) in 1672.

I sacrificed 3 months of virtue for 8 minutes of pleasure

It had been a long time since I went to the club in Delft and a long time since a went to the FLGS there. So I hopped in, saw some interesting stuff but remembered my pledge not to buy new games. That made it easy to resist the temptation of new games like Warhammer DiskWars and Relic, about which I want to know more before I consider buying.


But I did pick up Eight Minute Empire. There´s been some real enthusiasm for this game and it will not be hard to get to the table given its short playing time (not exactly 8 minutes though). The rules are really minimal, but that also works for Love Letters.

Breaking my resolution within 3 months, but I don't feel bad about it and I'll leave the resolution standing.
Posted by Jur at 09:50 2 comments:

Email ThisBlogThis!Share to TwitterShare to FacebookShare to Pinterest
Labels: boardgame

The Social in analogue games

I'd like to point you to this thought provoking post on social gaming on designer site Gamesbrief. It is about computer games, but I think the golden question is: can miniature and board game companies use these same techniques? I think they can, and they should. The technology is there.


It seems analogue game designers are too busy designing mechanisms rather than building a product to make money. And apparently, analogue publishers are still behind the video game, movie and music businesses.

Obviously the technologies involved have to be different than for video games, but it shouldn´t be too hard to develop a multimedia strategy to promote a game. Fans have shown themselves to be only too happy to contribute.

So if you design miniatures, why not set up a Pinterest or Instagram page where people can post their efforts? Why not reward them? Why not bring them together?  Why not offer them workshops?

Or if you design games, use your fans to test play. Challenge them to 'break' the game. Invite them to promote your game (like Too Fat Lardies does). Incorporate their story lines in a universe of stories around your game.

Of course, that means you delegate some of the control over your creation to others. That's nothing new in RPGs, so why not do it? Games Workshop could have had all that, but they left that huge social gap up for grabs. Who is going to jump in it?
Posted by Jur at 16:30 No comments:

Wexy comes out of the depot

If you have any interest in Waterloo the one thing you have to do in the next few months is go to Dordrecht and visit the exhibition on the art collection of king Willem II. Willem was an avid collector and connaisseur, but after his sudden death in 1849 the collection was sold to cover his debts. It has been partly reconstructed for this exhibition.

The special guest in the exhibition is Wexy, Willem's longtime favourite horse. He rode it at Waterloo where Wexy was wounded. The horse lived on to ripe age, but even then Willem couldn't part. Wexy's body  was preserved and remained in Willem's collection, but was also dragged around Ghent after Belgium split from the United Kingdom of the Netherlands to garner support for the Orange family.

These days it is mostly locked away so this is a unique opportunity to see Willem's faithful charger.
Posted by Jur at 15:00 No comments:

The book: again a considerable amount of reading, which is encouraging. I started the month with a big splash of online orders, which have almost all arrived by now. Some of these I have read immediately, like Officieren Aan Het Woord, The Unwanted Revolution, In the Wake of Napoleon, Hell Upon Water and Napoleon and Berlin.


I also picked up two Ospreys on Napoleon´s headquarters and general staff. There was the odd non-Napoleonic book bought, mostly second hand as promised: one on El Cid, three on WWI and French WWII aces from the translated Osprey series.

February was meager in terms of gaming. I missed two sessions (one of A Study in Emerald and one of Civilization), so I’m not happy with that at all. But at least I got some nice stuff played: Tales of the Arabian Nights, Concordia, In the Name of the Rose and Set. None of my new acquisitions, though. No games bought. Not tempted. 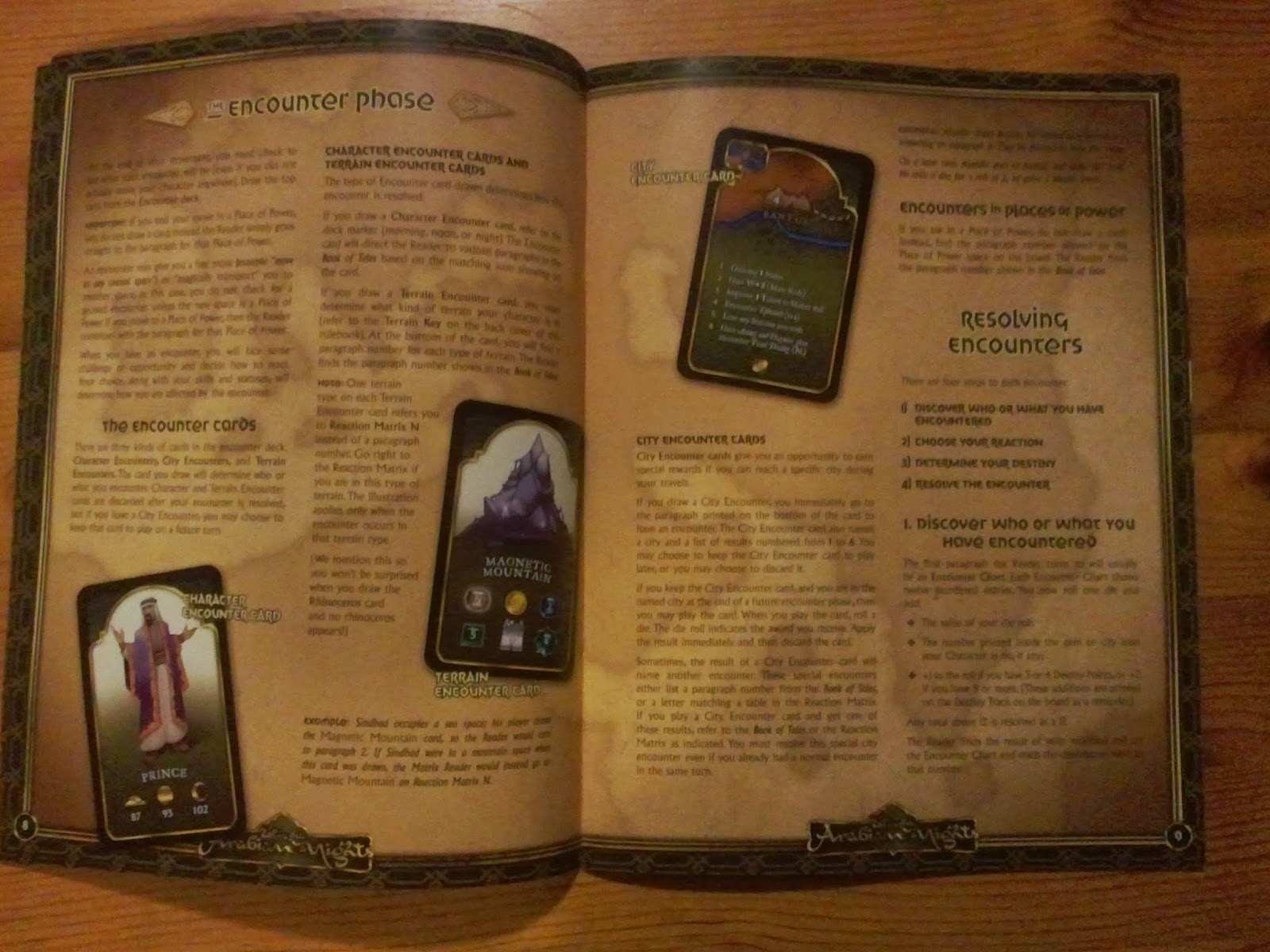 No minis bought, although I ordered bases for the American WWII infantry that René is painting for me.

I did 10 blog posts, mainly book reviews, but also a fairly popular one on why it matters to wargamers what happens to Games Workshop. I still have to finish one on the differences and similarities between Napoleon’s 1814 and 1815 campaigns. After finishing Leggiere’s The Fall of Napoleon, I’m sure there is something in there.

The Cid book rekindled the smouldering interest I picked up last year in Spain for the Reconquista period (which is about Christians fighting Christians and Muslims fighting Muslims as much as fighting each other). So I’ve added it to the shortlist of projects I might pick up after Waterloo.

All in all again quite a good month from the perspective of my resolutions.

As far as non-gaming NYR: I got a new bike. Spring has officially started! 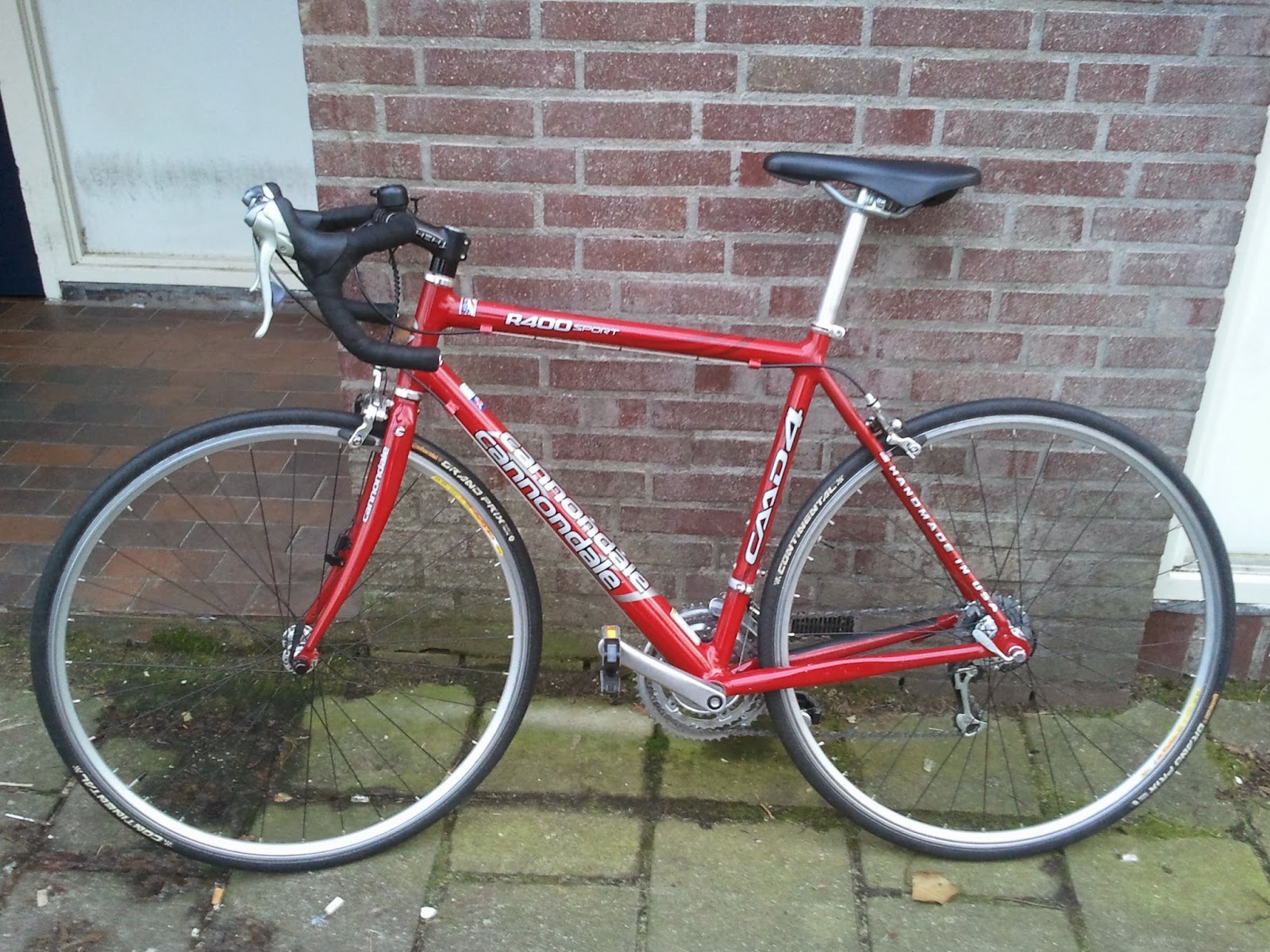