An introduction to Angkor

Angkor is one of the world's biggest archeological treasures. The site contains hundreds of structures, many of which have not been recovered yet. They were built between 800 and 1300 AD and are of impressive size and artistry.

Part of the mythical aura that surrounds Angkor stems from its recovery from the jungle. The city was abandoned in the 15th century after the capital had been sacked by a Thai army. Although people used to live there for a long time after and foreigners visited the site in the 16th and 17th century, much of the city was overgrown after centuries.

From the 1920s French archeologists (Cambodia was a French colony at the time) have started to recover and restore the temples. After the peace process in the 1990s and a listing as a UNESCO world heritage site these works, supported by archeologists from all over the world, have sped up.

What makes Angkor interesting is that there are structures built over a period of 500 years, and you can see different styles interacting. Those style changes also reflect changes in religion, for example the shift in focus between Hindu gods Shiva and Vishnu and later to Buddhism.


On the other hand, all that remains now is stone, surrounded by jungle. That makes it very hard to imagine the living city of a millenium hence, with the stone plastered, painted and covered in copper or gold, the wooden buildings and the surrounding countryside cut by rice paddies and irrigation canals.

And of course the people of the city are missing. Angkor must have had tens if not a hundred thousand inhabitants. Officials and traders from the provinces under Angkorian control must have visited, as well as foreigners. A late 13th century Chinese diplomat has left an account that adds a lot of colour to our understanding of daily life, but it is hard to envision in the present environment.

One touch of nuance however. Apart from the temples there remains another element in the landscape: the baray, or water storages. The two largest of them, to the west and east of the city, measure several square kilometers. It is still discussed whether they were built to supply water to the inhabitants and/or irrigation system, or for purely symbolic reasons, but they are still visible and in some cases partially filled to this day.
Posted by Jur at 15:30 No comments:

Back from South East Asia

It's been two and a half fascinating weeks. First ten days travelling through western Thailand in the footsteps of the 100.000 POWs who contributed to the construction of the infamous Burma railway (together with thousands of Japanese and perhaps 200.000 South East Asians). Then five days in Cambodia around the fabled temples of Angkor.

It's been a lot of information to take in, even though much of that was self-inflicted. And as always while travelling, full of impressions that go beyond the immediate subjects of the trip. You can't help to notice that both Thailand and Cambodia have shed much of the essence of democracy despite still maintaining the trappings. Thailand is ruled by a military junta (that isn't very good at listening to the people) and the Cambodian government has just had the major opposition party banned.


Yet life seems to be going on anyway. Military and police presence are light. In Bangkok and Siem Reap the Christmas season has started. Around the royal palace in downtown Bangkok we experienced the perfect storm of tourists, graduation day at university and the last opportunity to visit the ashes of revered former king Bhumibol (the exhibition has since been extended).

The poverty gap in these countries is still huge between those in the airconditioned zone (including us tourists) and those outside. Yes, I caught a cold.

And Bangkok is a powerhouse, ever expanding its network of flyover roads and sky trains. I remember that the first skytrain rode between my first two trips in Thailand in 1999 and 2000. Now there are several lines and an underground. Then there were 6.3 million inhabitants, now 9.6 million.

It was also intense to make this trip. I'm not a group travel person and when you are around 35-40 co travellers, that takes some energy out of me. Most of these people had a direct personal relation to the railway, which for them made it an emotional experience that I could only relate to from a distance. I wouldn't have survived if it had not been for my travel companion Michael. We never ran out of topics to discuss and events to comment on, however silly. 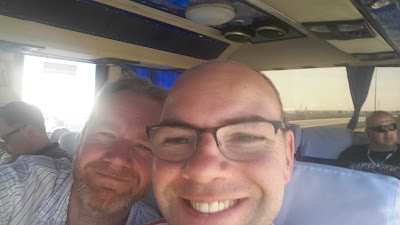 I will be posting a few bits from the Angkor part over the next week, but the Thailand-Burma railway story will arrive after that and in a different format as I have a distant personal stake in it.
Posted by Jur at 15:16 No comments: