I did a PolderCon post earlier this week to get my most pressing thoughts out. But there was so much more to see with some 45 different events on 35 tables.

Small scale historical wargaming is underrepresented in my opinion. Not putting it on makes players feel it isn't an option and that there are no opponents out there.

I guess it's a reflection of supply by miniature producers/game designers, but it won't change if there's no demand. Although I enjoy the skirmish type games, the offer different challenges than games at divisional or corps level and I miss that myself. So that's something I'm thinking about bringing more into the spotlight for next year.


Quite a lot of 28mm historical stuff


There was a lot of fantasy gaming.


And a lot of sci fi/Post-apocalyptic


Looking over all these pictures as I go through them today I am so happy seeing so many of them including the hosts explaining the game to players. That is exactly what PolderCon is about!
Posted by Jur at 13:41 No comments:

This weekend, PolderCon happened and good fun it was. The idea behind the convention is that a number of people host games and others come to play (a fair number switches during the day to do both). It's not a buying convention, although we had a few traders.

After cajoling people since August I was glad to have as many games on as we did. We averaged around a 100 slots in 30+ games in each session. There was a workshop in advanced tank painting and a presentation on modern tactics by a former senior officer.

You can't always predict what will work and what won't. Recently published games always do well, with most of those slots filled up.

Sometimes, self made games do well on the reputation of their designer or the appeal of their terrain and miniatures.


Generally, I think that self made games deserve more love. They may not be as smooth as the best commercial sets, but they often are more true to the theme, off the beaten path and prepared with more love.

The experience with board games is mixed. It could be that the skrimishy, miniature heavy ones (you know, the ones that get kickstartered with multiple boxes of plastic) do better than the more abstract ones in this miniature friendly environment.

Anyway, see you next year! 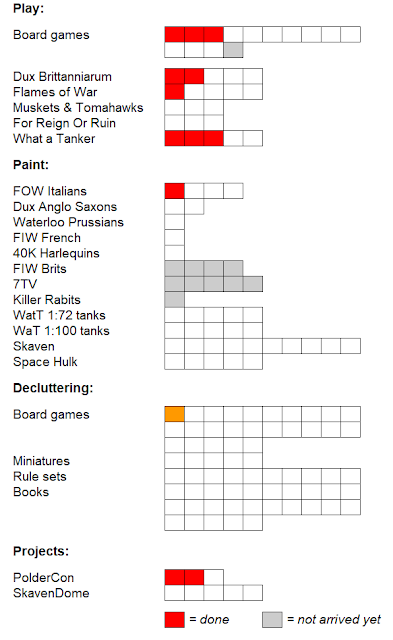 So there was a challenge for playing boardgames at Therewillbe.games and although it was silly to expect me to play 10 games 5 times, I thought I should manage to at least once play 10 games that I received/bought over the past few years and were gathering dust on my shelf.

I selected Secret Weapons of the Third Reich, Gothic Invasion, Bioshock Infinite, Mighty Empires, Quarantine, Bemused, Blood Bowl Team Manager expansions, Who's She? (a kickstarter then still to arrive), Mission Red Planet, and U-Boot (another kickstarter yet to arrive). Secret Satan then gifted me 5 Cucumbers, Dairyman, CIA vs KGB and Nyctophobia, which I added to the challenge.


And in that kind of coincidence that isn't really coincidence, I already had a shortlist of painting projects lying around, which I then included into a range of wider gaming goals. So I added a number of miniature games that I wanted to concentrate on playing this year (you'll notice some resemblance with the painting projects):
In terms of painting I had a few units for my middle war desert Italians for Flames of War that I bought at Crisis last November and wanted to add to my small army while we are still playing.

Late last year I also had bought a bunch of Footsore's nice Anglo Saxon levies to build up proper fyrd units for Dux Brittaniarum. The Gripping Beast Frankish warriors that I have used so far are fine, but not based very practically for Dux. 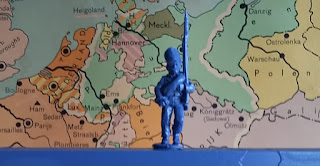 The Prussians are a small lot that would finish a Fusilier unit that I have sold to a friend participating in the Great Game: Waterloo Replayed charity multiplayer event in Glasgow next June.


The French and Indian War French regulars are to round off my small French force that I could use for Muskets & Tomahawks. And the 40K Harlequins are supposed make a basic team for Necromunda or a similar sci fi skirmish game that I have started on but not finished. These three should not take much time to finish. 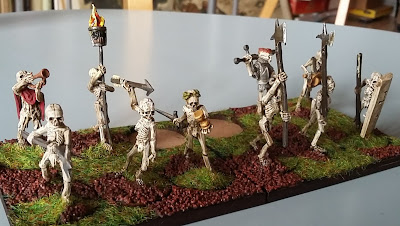 Then there's three kickstarters that I supported lately: 7TV: Apocalypse which would combine well with postapocalyptic stuff I already have, the wonderful Killer Rabbits by the same guy who did the brilliant Triumph of Death Pieter Bruegel skeletons (shown above) and Galloping Major's Allies on the Frontier provincials for the French and Indian Wars. All should arrive this year.

And finally there's a bunch of projects that I might take up as I please. Stuff for What a Tanker would expand the possibilities of what I already have (like some 15mm British tanks to face my Italians). Overall way too many plans to actually finish it all.

I also decided to include my larger gaming projects. First the PolderCon convention I help organising, and second elusive idea that I have which would become an eclectic MODOSG (Multiplayer One Day Offline Skirmish Game) blend of Frostgrave and Warhammer Fantasy Battles. But that's still very vague and will take shape in the second half of the year.

And finally there's the ongoing projects of decluttering (or rather, making room).

I managed to finish my Autoblindas for the Flames of War desert campaign with my colleague and his friends. They have already seen the elephant as well! My Anglo Saxon fyrd for Dux Brittanniarum AD 789 are almost done as well, in time for the next game. 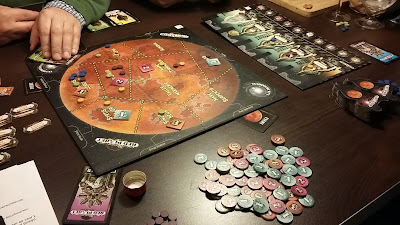 I've now played Bemused, Who's She? and Mission Red Planet. All three fun games to play in friendly setting. Had interesting conversation on the ladies in Who's She? with my girl so that's doing what it is supposed to. My friends loved the premise of Bemused that to take your adopted virtuoso to eternal fame it is better to get his competitors to succumb to doubt and dread.

So 3/14 after the first month on this track.

Managed two games of Dux on one Saturday at the club, 3 games of What a Tanker and one Italians vs Brits in Flames of War. That's also gotten me some way towards my goals (which I may have set rather unambitiously, forgetting that you sometimes can get multiple games in a day). 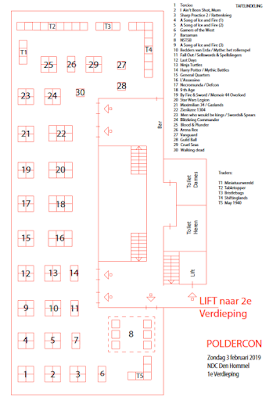 PolderCon is almost upon us (Sunday Feb 3rd) and it's been a real handful. Some last minute drop outs and the long run up (I've been cajoling hosts since September) leave me a bit deflated, but at least I've got my stuff done. Let's hope it all turns out well.

No real movement on shedding another games, books or miniatures, although I've lent out King of Tokyo to a friend who has been playing it with his daughters to great success. So I won't mind if it stays there.
Posted by Jur at 11:35 No comments: