Not quite a review of Achtung Schweinehund by Harry Pearson. 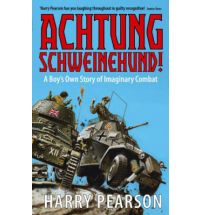 In the end my parents only have themselves to blame. I guess I had just turned 12 years old when we visited the Museum of Amsterdam History where I walked into an exhibition of flat toy soldiers. This was way more interesting than the plastic soldiers that went AWOL at alarming rates in our back garden!

My father traced the source of the miniatures back to a shop in The Hague, the Boutique de la Grande Armée, named after Napoleon's awesome instrument of power. We went there a few weeks later and I found not just flat tin soldiers, but also the round Hinchliffe Napoleonic ranges, which I liked even more. After a short while I spent most of my Saturdays going to the shop, buying an occasional miniature and watching the older men play and discussing military history.

The Boutique was no Friendly Local Gamestore, but a store with a club room attached and only open on Saturday. This was a collection of odd middle aged men, with a leaning to right wing politics that I only grasped later. I remember my embarrassment when I saw one of the members of the club appearing on television representing a neo-nazi organisation and I could only hope my parents wouldn't recognise him.

Due to this and the limited room for gaming at the store, a group of younger players started their own club. In a few years the Boutique's owner would decide to close and emigrate to sunny France. Our club still exists twenty years later.

My experience may have been like that of many other wargamers. It certainly is close to that of Harry Pearson, who grew from playing with Action Man to plastic soldiers to metal miniatures. The first part his book is actually not so much about wargaming but about growing up in 1960s England. Apparently it was very boring and narrow, but ‘the war' was around all the time in family stories and popular culture. Fathers, uncles and grandfathers had all served and fought in the army or navy and the threat of the Cold War was very real.

For (war)gamers the book often comes frighteningly close to our own experiences. Upon reading I noted some uncanny resemblances between Pearson's youth and mine. Like him, I remember almost drowning in a pond and the long afternoons wandering about the neighbourhood with my schoolmate Gijsbert, playing cowboys and Indians while we eluded the other boys to sneak to the enemy base.

Pearson further describes his large collection of toy guns. It brought back to me the wonders of the jigsaw, which provided us with wooden toy guns, painted by my brother. My brother was always the more talented of the two of us when it came down to handicrafts. He built the tanks and weapons for our Playmobil armies.

And a few weeks ago I had that moment of instant recognition, stepping into a room in Tate Modern to see the Andy Warhol painting my brother had painted on his 1/20 model plane. Later he built a model of a Fokker DXXI after his own design.

Although I never could match my brother's skill, like Pearson I proved more apt at handling the brush. I never became more than an average painter, but it will do on a wargaming table.

This part of Pearson's account will be very familiar to English wargamers. There are the pioneers of the hobby, like Don Featherstone and Charles Grant. The shows he lists (including Crisis in Antwerp!) are shows me and many of my friends have attended. This means it may have less to say to American readers, who presumably have a different experience.

The latter part is more universally recognisable. You can read Pearson for the interesting trivia on wargames through the ages, its take off in the 1960s and 1970s and the peculiar characters involved in it. There is ample discussion of the way in which wargames have been featured in popular media.

But this also the weakest part of the book, as it moves from Pearson's personal experiences to a more general overview and the omissions stand out. It doesn't touch on developments in the 1990s, when technological advances vastly improved the quality of miniature castings. Peter Gilder miniatures were already much better than the later Hinchliffes, but Wargames Foundry's Franco-Prussian range was really a leap in quality of design and casting. Not surprisingly, those designers came from Citadel, the fantasy miniatures company that later merged into Games Workshop. Fantasy wargaming (and GW) is also sorely lacking from Pearson's account, due to his professed distaste.

Pearson did a short bit of research on board games, quoting a member of boardgamegeek.com. But looking at his activities, this was solely as research for the book and he hasn't returned to the site in ages. Its summary treatment makes you wonder why it was included at all.

Yet, there are positives here as well. When Pearson writes about people he is at his funniest but also at his most perceptive. The discussion by two wargamers of how women ‘ just don't get it' is hilarious. And so is the way in which wargamers try to distance themselves from related hobbies, such as fantasy and live role playing, re-enactment and collecting. I can only confirm Pearson's many stories of long standing feuds and disagreements in the wargaming scene, and at some times I felt I knew who was hidden behind the nicknames.

By the end of the book, at last, the stream of loosely connected anecdotes, stories, trivia and observations get tied up. Pearson makes fun of wargamers, their mushy clothing, their weird lingo, their obsessive collecting, their feuds and petty disagreements. And yet, he loves them. Whatever you may think of the style and content of Pearson's book, it is the first venture into what wargaming actually means to those that play it.

"In the end, every man needs a place unto himself, to escape from the dreariness of daily life." Or so Pearson thinks. But is it really just escapism? Is there no fundamental difference between wargamers and stamp collectors, flower decorators and plaid makers?

In that sense the book is confronting to everyone of us. Many of us feel at least slightly uncomfortable at the geekiness of our hobby and the company we engage in. To most wargamers, it is a hobby. A consuming hobby, but also one that isn't very harmful, although in pacifist circles it was long seen as suspect. Wargamers may not always be the most socially apt, they may have weird laughs, lax standards of hygiene (we all have stories), bad taste in clothing and a limited range of topics for discussion, but they are generally kind and responsible.

I myself haven't been positive always about my gamer friends, but I've come to realise that there is a part of our lives that we share, rather than just a hobby. And unlike Harry Pearson, I do know of many of them whether they have a family and what job they do. This is in the end my problem with Pearson's take on wargamers. To him they seem to be people sharing the same hobby but little else. Something to be embarrassed by and to hide from your ‘cooler' friends.

But the horrible truth for those that are uncomfortable with this company is that they themselves share at least a number of those traits, and that condescension for fellow players also reflects on themselves. And in all these respect the difference between wargamers and boardgamers is very small.

When Pearson expresses his unease about being a wargamer, his friend TK retorts: "We work hard, we don't smoke, we don't gamble, we don't go down to the pub, we don't chase after women and we don't sit in front of the telly all night moaning there's nothing on. We have a hobby that's given us decades of fun, helped us make hundreds of friends all over the world and we don't do a drop of harm to anybody. What's sad about that?"

And damn right he is.


This post was published earlier on Fortress Ameritrash
Posted by Jur at 20:39