Today will see Russia's annual victory parade, and while this may feel a bit uneasy in the light of recent events, let's focus on events 75 years ago. I spent the last week reading Svetlana Alexiyevich's War's Unwomanly Face. It's been devastating. 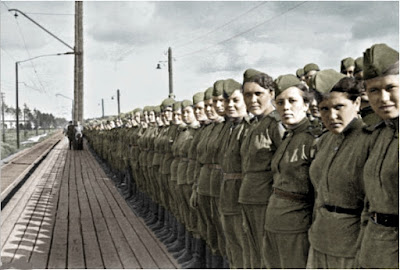 The book was first published in dying years of the Soviet Union, but there was still considerable censorship. The translation of a later edition includes more graphic detail. It's not a book for a relaxed read. You will find yourself hit with strong emotions but, thank goodness, also an occasional smile.

There's so much in this book: the naive enthusiasm of the girls to get to the front, their camaraderie and their perseverance. The women are very frank about their experiences. Alexiyevich must have been a very good listener to get these very personal accounts out of these women, while all the focus in (post)Soviet history is on the glorious achievements of the Red Army.

It was tough to be a woman on the eastern front. There wasn't room for female comforts, like there wasn't for male comforts. No extra underwear during periods, but then again, the war ruined hormonal cycles for many women, sometimes for good.

The most gripping passages come from the women that fought behind the lines in the partisan groups. Not only was this the most brutal conflict, it also directly involved family members. The accounts of seeing your own mother being driven before a German patrol is harrowing, and so are those of the woman carrying around her baby and coding machine whilst fleeing for German sweeps. And that's not the worst incident.

Life remained tough when they came back. Just like the men, they often found their homes and families broken up and the environment of reconstruction harsh. Their bodies were broken because they suffered hunger and physical exhaustion during their late puberty. Their chances of finding a husband were smaller because they were not considered womanly anymore.


It's been a busy few days remembering the end of World War II and more will follow. But if you can spare a few moments for the little sisters fighting on the eastern front. And if you can get a copy of this book, don't hesitate.
Posted by Jur at 09:40 1 comment: