The Siege of Hamburg, Sideshow of the Fall of Napoleon

Die Eisfestung by Gabriele Hoffmann is a nice piece of history writing in accessible German. It fits in well with the other very readable history books that German publisher Piper provides to a broad audience. As far as I can see with few concessions to the thoroughness of the research involved. Sadly the only illustrations in the book are two very informative maps. 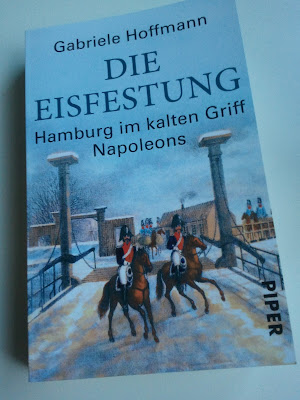 Hoffmann first sketches the revolt in and the French recapture in Spring 1813, followed the French work on the fortifications and the tribute imposed on the inhabitants during the Summer and Autumn. This part of the book also sets the scene by introducing the main characters like Davout and several more and less important inhabitants of the city.

The book paints a reasonably positive picture of Davout. His devotion to his wife and children is only matched by that to Napoleon. The marshal puts his talents and iron will at the service of the Emperor and everything in its path, including his family, is shoved aside.  “Die Geschichte seiner grossen Militärkarriere is auch die Geschichte ihrer Geburten”, Hoffmann writes pointedly.

Similarly, any obstacle to the execution of his orders is overcome. In 1813 Davout is more determined than ever, trying to regain the favour of Napoleon after his fall from grace in the wake of the Russian debâcle. The only reason the marshal sees for leniency in dealing with the rebellious Hamburgers is that it will induce some of them to return to the city and increase their contribution to the overall goal. But as the allied troops under Benningsen close the ring around , Davout does not hesitate to burn the outlying garden houses of the inhabitants to clear the field of fire for the defenders. He also throws the young men and the poor out of the city as he does not trust them or wish to feed them.
For the inhabitants the last year under French rule is tough. The embargo with has destroyed much of the trade and the only employment is on the French constructions. With the French unforgiving in their effort to control the city, it loses much of its vibrancy. As the siege is laid in late December, the only reason to stay is to protect property against the French and looters. Only 55,000 of the over 100,000 inhabitants remain in the city, next to some 40,000 French, Italian, Dutch and German soldiers.

Many Hamburgers therefore experience the siege from outside the walls of their hometown. Soldiers from the and rebel leaders that have retreated with the Russians in Spring 1813, wives and children of rich Hamburgers that were sent out of town during the Autumn. They all depend on networks of kinship and trade relations for housing and nourishment in Danish Holstein, liberated Mecklenburg or far off . It is their correspondence with relations in the city that provides Hoffmann with much of her understanding of what the siege meant for civilians.

The siege itself is not particularly exciting. The freezing cold poses problems for the defenders as the main defense work, water, loses its function as an obstacle. Nevertheless, Davout´s engineers come up with creative solutions, using horse dung and ice to create new defences. Although Benningsen executes a number of attacks, he seems content to keep Europe's most talented tactician inside with equal numbers.

This is apparently also how Napoleon saw the situation. A letter that never reached Davout the Emperor lambasts him for his inactivity against a weaker enemy. Together with similar complaints of several senior officers of Davout´s corps during the Autumn campaign, this paints an interesting contrast to the marshal´s martial prowess in the previous years. Although nobody could question his continued devotion to duty and skill as an organiser of troops, it is remarkable that after returning from , he never again fought a major battle. Hoffmann slyly suggests that this may have to do with traumatic experiences in 1812.

Despite the ever worsening news from France - first invasion, then defeat and abdication - Davout is determined to hold out for his master. The loyal commander will not depend on the rumours spread by his enemies for his decisions and awaits official instructions, which don't arrive until late April. It then also becomes apparent that the Bourbons and the allies have come to a peaceful agreement and the French can leave Hamburg undefeated.

Hamburg quickly returns to its former self as inhabitants come home and merchant ships arrive from all over the world. Some refugees have even found their new partner in exile. For many, this also signals the end of their correspondence or private notes as they turn to rebuilding their lives.

Despite his successful defense, Davout returns to France in disgrace, amid recriminations over his treatment of the population and the requisition of all bullion in the Hamburg bank. Although he now at last has time to devote to his family it is too late to see his son Jules, who was born and died during the siege. A year later the marshal will take centre stage for one final act in his tragic relationship with the man he has devoted his life to.
Posted by Jur at 18:18