The Phases of a Miniature Painting Project

Tomorrow I will be participating in one of four simultaneous battles from the Waterloo campaign. Slight problem is that the rules will be Black Powder for which I have little love, or any ruleset of its ilk. I go there to meet some really nice people. And because I bought a bunch of figures. Which has become a bit of a circular argument. 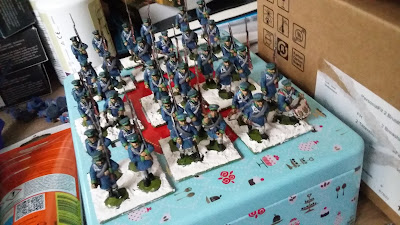 As I progressed with the painting last weekend, I started to recognise a number of phases in my painting. Whilst I have enjoyed preparing the miniatures and spray painting them, the painting itself became increasingly discouraging. Trying to follow the Army Painter philosophy you should refrain as much as possible from highlighting. I did a few highlights in blue, put a layer of light gray under the white trousers. Once I got to the white leatherwork, the many mistakes started to get me down. Although I persevered in the belief that Army Painter dip would solve all my problems, my religion was sorely tested when a came to the piping of the Landwehr field caps. 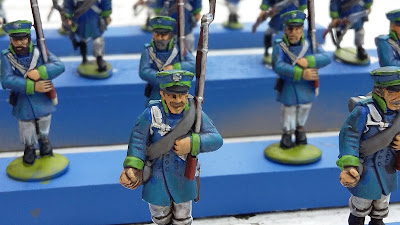 My hand may have been less steady, or I was starting to get irritated by not being able to reach the miniatures as easily when individually mounted. I was disappointed in the result and I resolved to go over all the caps again to redress the mistakes. I went over most colours. That made me feel better, but it also required extra time. 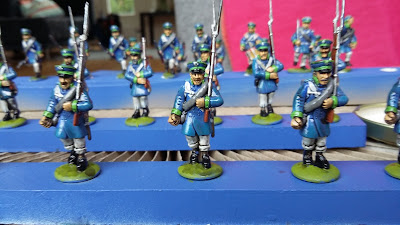 But what a difference the army painter dip made. It is very forgiving! By this time I was pretty happy with the look of the miniatures. The hardest part still had to come: basing them. I got a lot of useful suggestions from my facebook friend at Dutch Miniature Wargames, but I was being stupid and didn't have the right tools to hand for applying the plaster, but when I improved a sort of plastic spatula my aggression levels dropped off a bit. 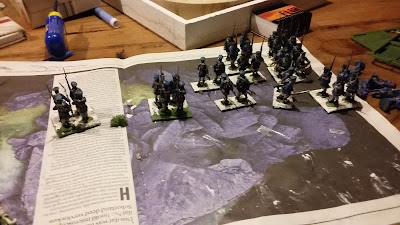 I still believe that basing is the worst kind of job and psychologically at the toughest time in the process as you try to finish the project in time. I also am happy to go on record to say that re-basing miniatures is of the devil and a clean waste of time. No ruleset is worth that kind of shit.
Posted by Jur at 15:30 3 comments:

Somehow, what started out as an anything-but-Waterloo summer has turned in to a medieval reading tournament. After the wonderful Quest for El-Cid, I turned to Guy Halsall’s Worlds of Arthur. And of course it’s hard not to compare the books. Essentially the books have a similar approach: to use the story of one semi-mythical character to gain a wider understanding of the time and place they lived in. And they face similar challenges: a flood of artistically and ideologically embellished literature obscuring a dearth of dependable sources.

Rodrigo was retroactively incorporated into the Reconquista propaganda and 19th and 20th century Spanish-Castilian nationalism. Much of the popular image of Arthur is based on 12th century romantic literature, which by the way has strong ideological or at least moralistic overtones, as Halsall points out. This has not been improved by 20th century fantasts who have claimed to have proven certain myths based on very crude and fanciful interpretation of isolated snippets of evidence.

There are differences too: while Rodrigo can be proven to have lived and the main occurrences in his life are beyond doubt, Arthur’s best bet is that it cannot be disproven that he has existed, but that it is unclear when exactly and where. But the fundamental challenge remains to construct a narrative from very slim and unreliable evidence.

"Indeed, whether or not one of the post-imperial British kings was called Arthur is probably the least interesting question that one can ask about this important period."


Like Fletcher, Halsall is less interested in the main character than in the society that he (supposedly) lived in. Halsall effectively dismantles the 'barbarian invasion' interpretation of British medieval history. But the historical discourse which has replaced it (well presented by Robin Fleming in Britain after Rome), and focusses more on non-violent and cultural domination by relatively small groups of immigrants, also doesn't satisfy him entirely.

First of all, Halsall more strongly emphasises that Britain was not an island but part of a North Sea cultural zone where migration, like trade, was not a one-way phenomenon. This means that cultural change was not the result of conquest, but of interaction and shows parallels on the continent.

Halsall agrees with the new historiography of British decline even before the end of Roman presence and that for a long time the population of Britain saw the removal of Roman forces to the continent as temporary. Also the coming of the Saxons started as allies to the local population some time before the Roman departure. This may have been part of a civil war(s) between Roman competitors.

Finally, post-Roman Britain probably had larger political units than long assumed. Even if not strongly unified, patterns of overlordship by weak states existed, in connection to mainland Europe.

Reading Halsall it is clear that he has a very deep and keen insight into the different material available. His scientific criticism of the written sources is unparalleled and his points out many logical pitfalls in the interpretation of archeological findings. It is clear that what we can infer from them is very limited. So when he keeps open the possibility that Arthur may have really existed this is more from the viewpoint that there is no evidence to disprove his existence, just as there is no proof that he actually did. I think the book is a must read for any serious student of ancient and medieval for its state of the approach and methods.

But in the end, it's the organisation of the book where Fletcher prevails. Halsall's convoluted break up of the development of the 'historiography' of Arthur makes the book tough to finish and the part that is most interesting, Halsall's alternative view of post-Roman Britain, suffers from the reader's desire just to be done with it. Which is a shame.
Posted by Jur at 22:47 No comments:

Hurrah for deadlines! Significant strides were made painting my Landwehr. Now preparing to base the minis and allocating magnabase. I might not have to do frantic last minute work on Friday evening... 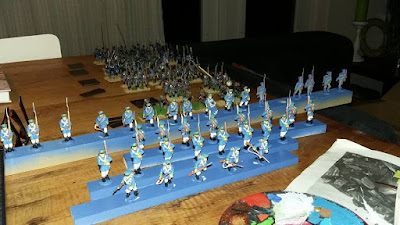 I've been able to do some painting the last two weekends, so that I got it almost done tonight. All that remains to be done is the drum and the drummer's shoulder wings. I also need to do the shoulder straps of the soldiers. I only decided today what unit they were going to be. I wanted them to be from Zieten's Corps at Waterloo because then they can fight at Ligny as well as Waterloo. Which basically leaves you with Westphalian Landwehr. Not the best of troops, but probably more fun and challenging than the French Guard. I've picked the 4th Westphalian regiment because I like light blue.

It's not high quality painting of course. But it's fit for purpose and so far within the project constraints. There is still one issue outstanding, though. I still haven't got the materials to base my troops on. I also haven't prepared anything for basing: no flock no other stuff. I might just leave them as they are and just stick em on.
Posted by Jur at 21:29 No comments:

More on the Waterloo front

Although it's gone rather quiet with regards to the battle, it hasn't completely died down. Last week saw the publication of my article in Mars Et Historia, a Dutch magazine on military history. 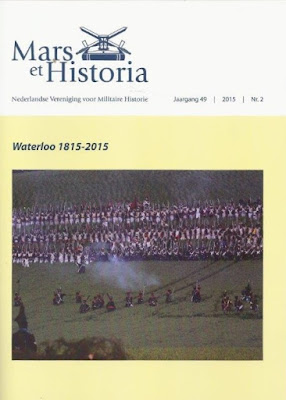 My bit delves on the loyalty of the Dutch and Belgian troops in the wider context of sweeping political and territorial change in the 25 years before it. In that light it was no wonder that people questioned the allegiance of people living the areas affected. In fact, the armies in which no conflicts of loyalty played a part were the exception!

This Waterloo special also includes articles on the Dutch general staff, Dutch flags during the campaign and a discussion of the role of General Chassé's troops in repulsing the attack of the Old Guard. The outcome might surprise Dutch as well as non-Dutch readers!

The good news is that you can now buy this volume separately online!

In the autumn we hope to fan the flames with a re run of a documentary series on the first three Dutch kings (Williams I, II and III) which also includes the battle. Narrator my friend Jeroen.

Then a documentary on the battle itself based on the recollections of one of the Dutch soldiers involved. Co-narrator my friend Ben.

And also my appearance in the Hoe Heurt 't Eigenlijk? series for which we filmed in June.
Posted by Jur at 22:26 No comments: