I promised myself two small painting projects for the 2nd half of 2015. I had already compiled a short list of possible projects in the early part of the year. 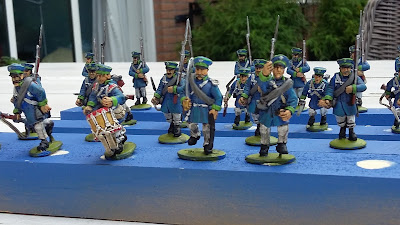 And then by chance I started off on the 1815 Prussians for the Battle of Waterloo, a game that was put on for the end of August. Somebody put a few batallions up for sale in May and I decided to buy them, including some unpainted stuff, adding up to two batallions of Landwehr. It was a pretty tough job finishing in time for that, but as always a deadline helps.

I've managed to resist the temptation of buying more unpainted lead/plastic, because once this deadline's gone, there's not much chance of me painting it. I bought a bunch of painted limbers and guns and staff officers was offered by someone at the club. Good buy, but it also included a bag of unpainted cuirassiers... 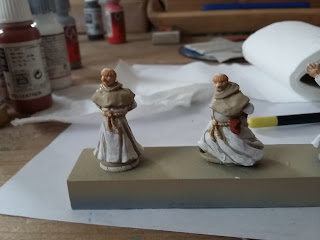 The good thing is that I felt so happy about painting that I picked up another tiny project last Monday, spraying a base coat and putting on three colours on a set of six medieval monks useful for either Dux Brittanniarum or SAGA. And then some more work this weekend! Pretty easy to paint and limited detail, which is good to keep momentum going! 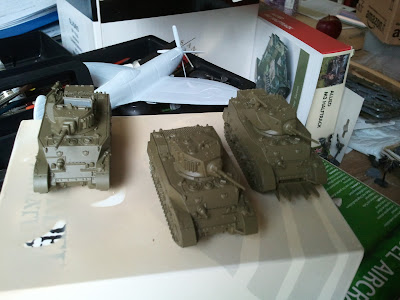 So what after this short project? This is what I'm thinking off:


Oh well... I can still try to get somebody else to paint some of this stuff, which is what I decided on two years ago.

So last Saturday I could reap the fruits of my hard work on a Landwehr battallion! A very well organised day, with a lavish lunch, good company and a feast for the eyes. It was clear that more talented painters than I had spent more time on building their armies. Mine were swamped a bit, but at least gave a good account of themselves, especially the Jäger.

I am very grateful to the guys who made it possible: Patrick for organising, Erwin for writing the scenarios (with a little help), Jelle for selling his troops to me and Peter for lending part of his troops to me for the day.

Black Powder didn't disappoint. After 8 turns, which took us close to 6 hours to play, the Prussian troops had hardly entered Plancenoit. So instead of sweeping changes in the tide of battle, as in 1815, is was now a overloaded table with troops queuing whilst those at the front waited for the dice to roll their way. It made me wonder whether the BP guys that wrote the scenario actually playtested it.

It's good to have some disorganisation, but you can just expect a 2D6 command roll to fail 4 out of 10 rolls if you rating is 8 and you need to roll that or lower. Which hamstrings most of your commands needlessly and raises frustration similarly. If that happens a couple of times of your 8 turns you play, well...

"This is why I don't play toy soldier games any more" a wise man once said...


On the other three tables they were able to (just about) finish their scenarios in time, but I have no idea whether those games felt historical. Then again, that was not the issue of the day. It was an excuse to paint miniatures and have a nice chat. Both those aims were achieved. I might be tempted to join the project next year if it helps me engage my American War of Independence miniatures. I might even pretend to play Black Powder.


Some day I will write the ultimate book on how Big Battles should be fought in miniature, but I'll just start with a few rules I've picked up over the years: