Christmas 1989, part II - Under The Sound Of Flutes

That samewinter I wrote a song, inspired by the feeling that something momentous had happened and how it had shaped my generation (although in hindsight it somehow seems to claim that we youngsters had made it happen).

These are the words:

It was a reference to Xenophon’s Hellenica, an attempt to finish the history of the Peloponnesian War started by Thucydides. The war between and ended after almost 30 years in 404 BC with the defeat of the latter and the destruction of the great wall that connected the city with the of , thus ensuring that as long as ’ naval power remained, the city could never be starved by a land army. In the end, the Spartans did just that. This is how Xenophon described the occasion:

“After this Lysander [the Spartan admiral] sailed into , the exiles returned, and the walls were pulled down among scenes of great enthusiasm and to the music of flute girls. It was thought that this day was the beginning of freedom for .” *


There was such a sense too in 1990. A great sense of optimism and hope. George Bush later talked of a new world order, Francis Fukuyama declared the end of history. And how I felt, you can find here.

As I studied in the 1990s, that hope was quickly turned to dust. The new world lacked order and saw humanitarian intervention turn to disaster in , genocide in Ruanda and ethnic cleansing in an imploded . And that was before the War on Terror. But by that time I had already become a cynic. When I heard the news of the massacre in Srebrenica in 1995 I couldn’t believe it. “They can’t have been this stupid! It would change everything. They’d lose the war.” But it had happened, and they lost.

By 2003, when discussing whether the US were right to attack Iraq, I didn’t believe there really were weapons of mass destruction, while my promotor couldn’t believe the Americans would lie about it.

For some people the fall of the Berlin wall and the end of communism in Europe will not have much significance, but for those whose heart was lifted by that occasion, and who spent the end of that year looking on the future with hope, only to lose it in the face of disaster and genocide, I ask you to reach back to that feeling of 25 years ago. Even if the world seems as dangerous a place as ever, in the people are mostly free and mostly much better off than 25 years ago. Some things have changed for the better. There is, in fact, reason for hope.


ps I never said the lyrics were particularly good

pps The long walls of Athens were rebuilt a decade later. Just saying...

ppps I'm not equating Athens with the Soviet Union. But it is an interesting change of perspective from the usual assumption in Cold War parallels with the Pelopponesian War that Athens = democracy = The West and Sparta = dictatorship = Soviet Union. There is certainly a case to be made that the Delian League was an evil empire and Sparta was a restrained leader of a 'coalition of the willing'.
Posted by Jur at 18:45 No comments:

Email ThisBlogThis!Share to TwitterShare to FacebookShare to Pinterest
Labels: 1989, history

It’s been 25 years since an amazing year. After month of protests all countries of broke free from communist oppression. The last to do so was , and it was touch and go whether it would erupt in violent civil war. Starting from , the wave of protests spread throughout late December until a few days before Christmas, dictator Ceaucescu was booed off a balcony during a speech. On Christmas Day he and his wife had been arrested, tried and executed.

It was my last year in school. I had known nothing else than Cold War, although there was talked of detente in the 1970s and the 1980s saw glasnost in the . But there was also , there had been the threat of Soviet invasion of in 1981 and there were always nuclear missiles. I had been protesting against nuclear missiles several times in the last years. I had had discussions on simultaneous or one-sided disarmament. All that I knew, and all that most people under 50 knew at the time, was Cold War. And suddenly it was over, and what was more, we’d ‘won’.

That year, between Christmas and New Year’s Eve, I went on camp with a few dozen kids from my school. The last evening was traditionally closed with some improvised theatre performances, and we came up with a version of Ali Baba and his 40 bandits. In this case, the story ended in the bunkers of the Securitate, ’s infamous secret police, where the soldiers were waiting for the Leader to give the sign for the great counter attack. Hunched by the radio, on Christmas eve, in came the call from the Leader’s HQ. The soldiers crowded around the loudspeakers so they could hear his message. It was now or never, what was it that the Leader would ask of them? There came his voice, crackling through the static…:

“Soldiers, long have you been loyal to me and in all difficult moments I knew I could count on you to stand by me. Now is such a difficult moment… But, I’m sorry, there is nothing I can do. I’ve got the Christmas time blues.”

And my friend Jorin set in the chords for a slow and wistful blues. I think that night we sang it dozens of times that night.
Posted by Jur at 13:53 No comments:

Email ThisBlogThis!Share to TwitterShare to FacebookShare to Pinterest
Labels: 1989, history

Look what I found under the Christmas Tree today! 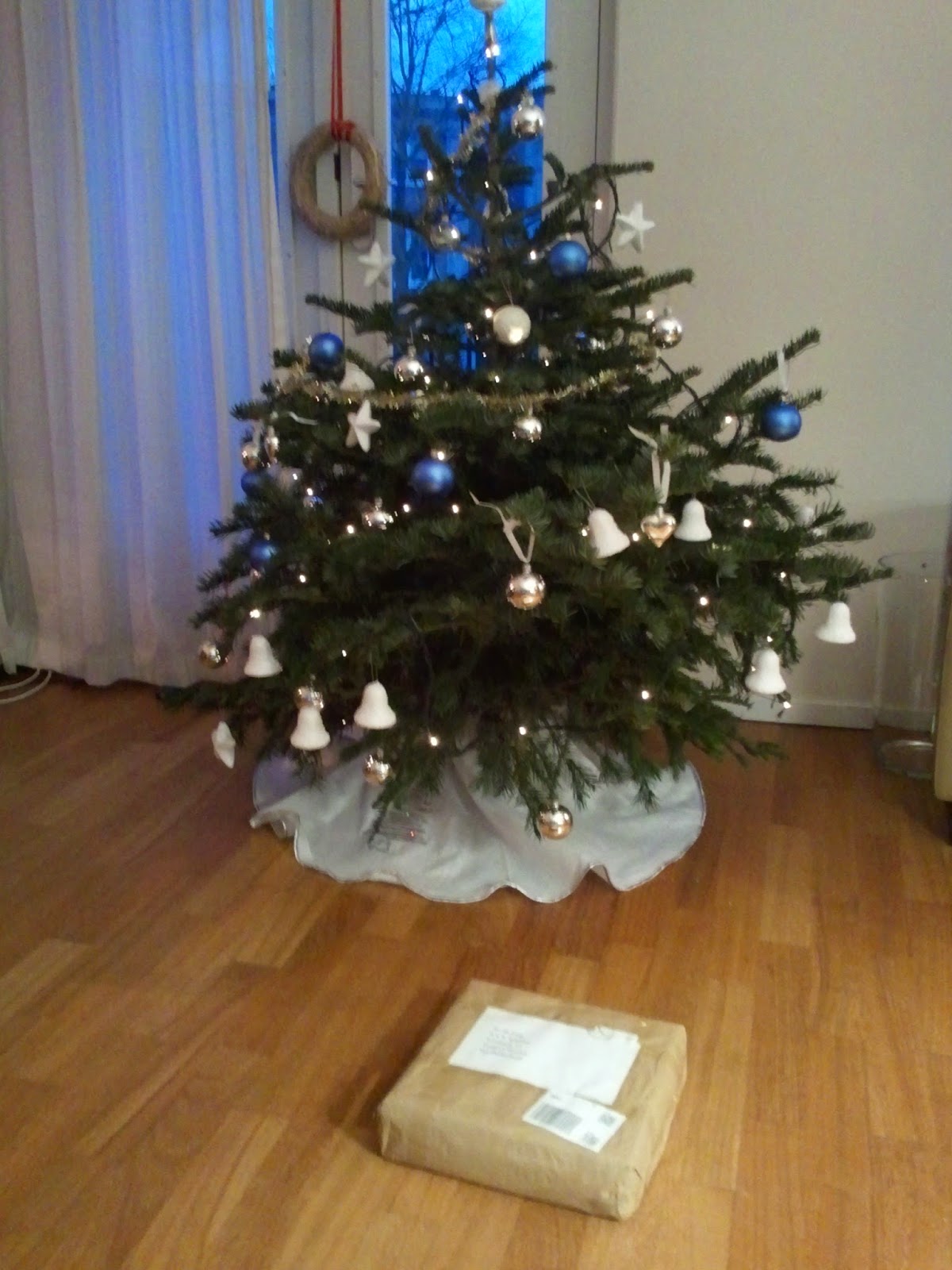 With not a little trepidation I removed the paper cover, revealing the dread... 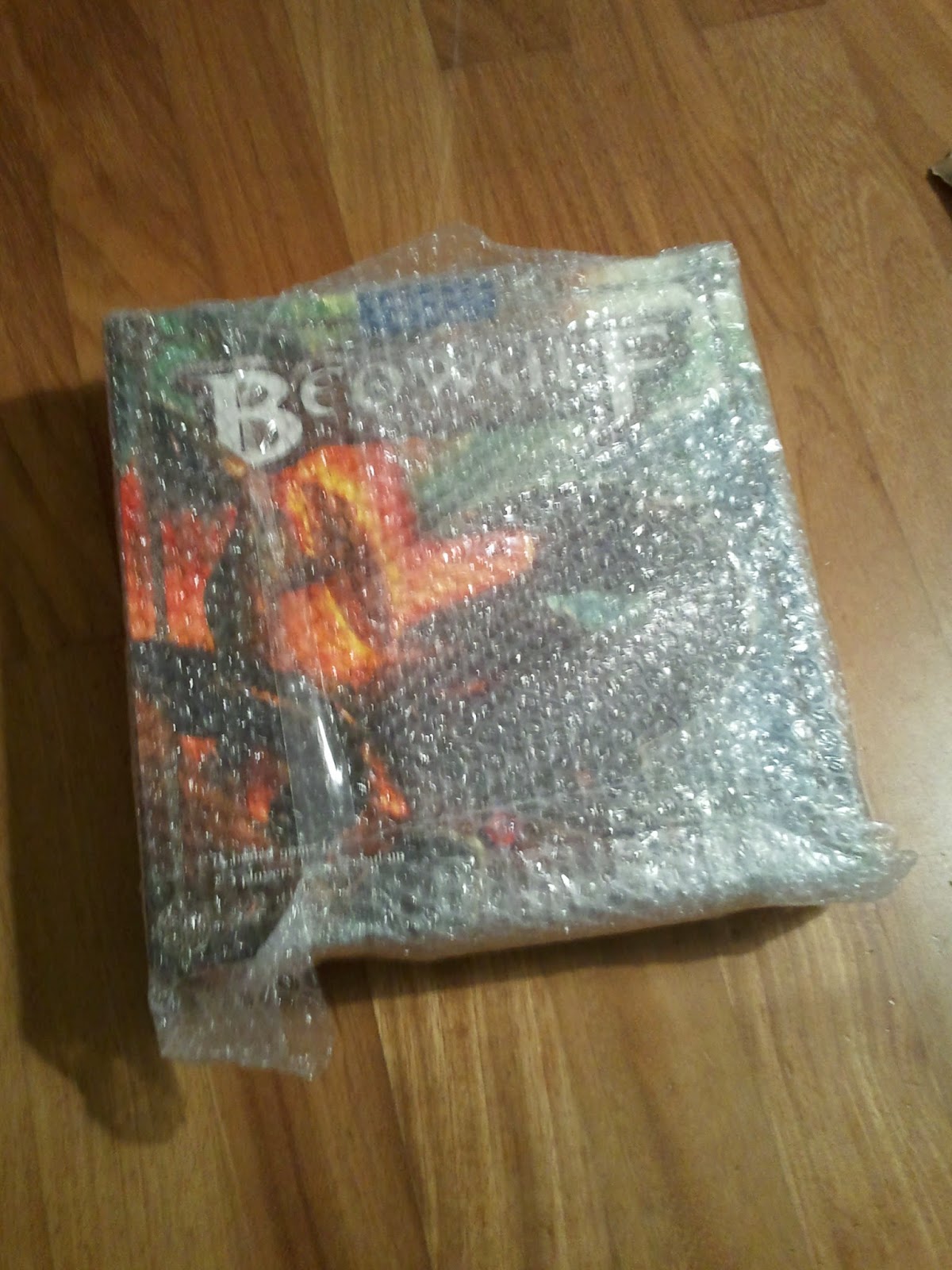 NOOOOOH... not Beowulf! I was haunted by the Curse of the Returning Game! I gave it away a few years back, because.. because... well, because KNIZIA, you know? 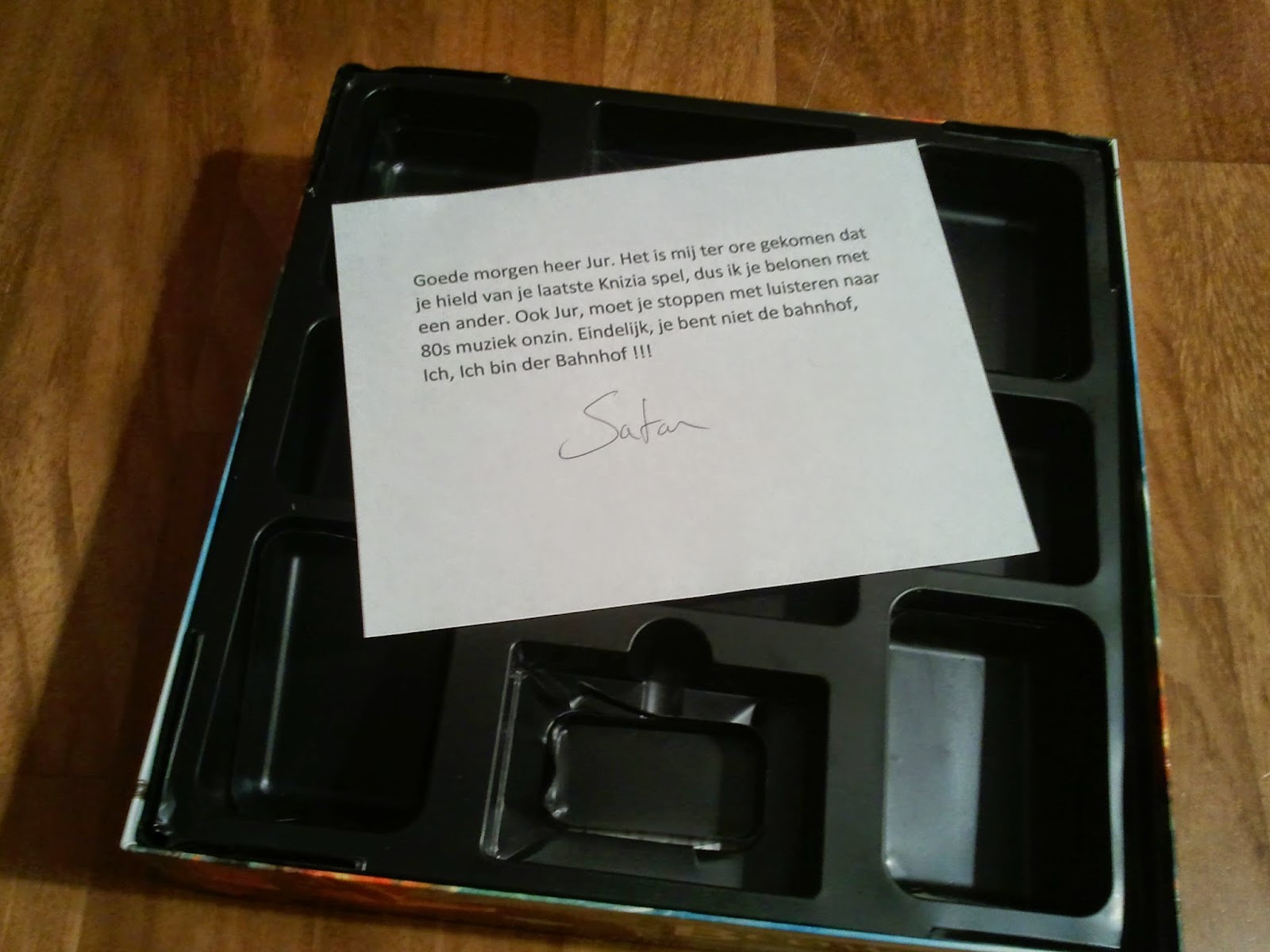 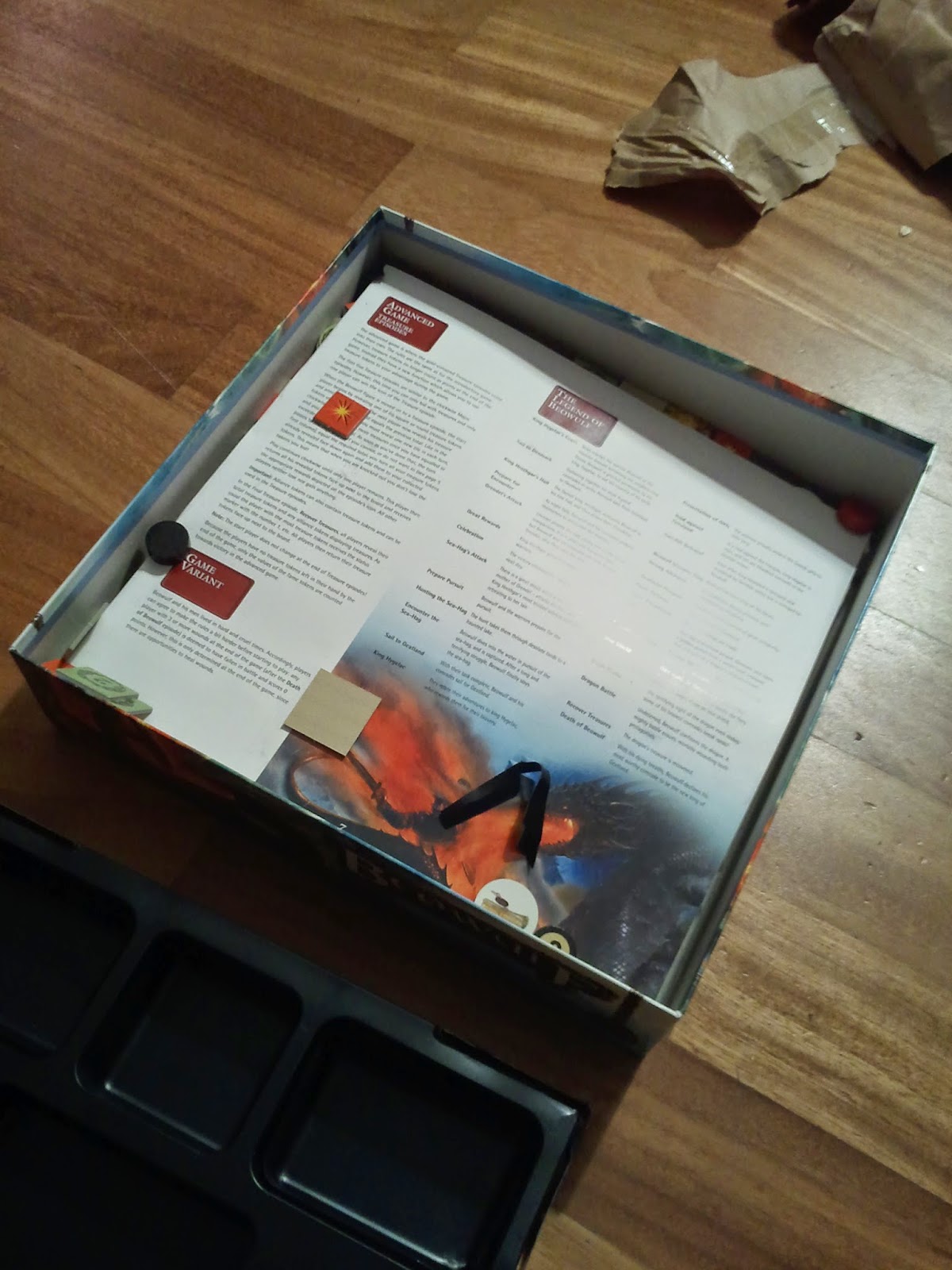 Well... at least the rules were included. Not very Secret Satan 2014, but I count my blessings.

Hoping against hope that Satan was pulling a trick on me and just storing a box load of goodness inside, I delved further into Pandora's box... 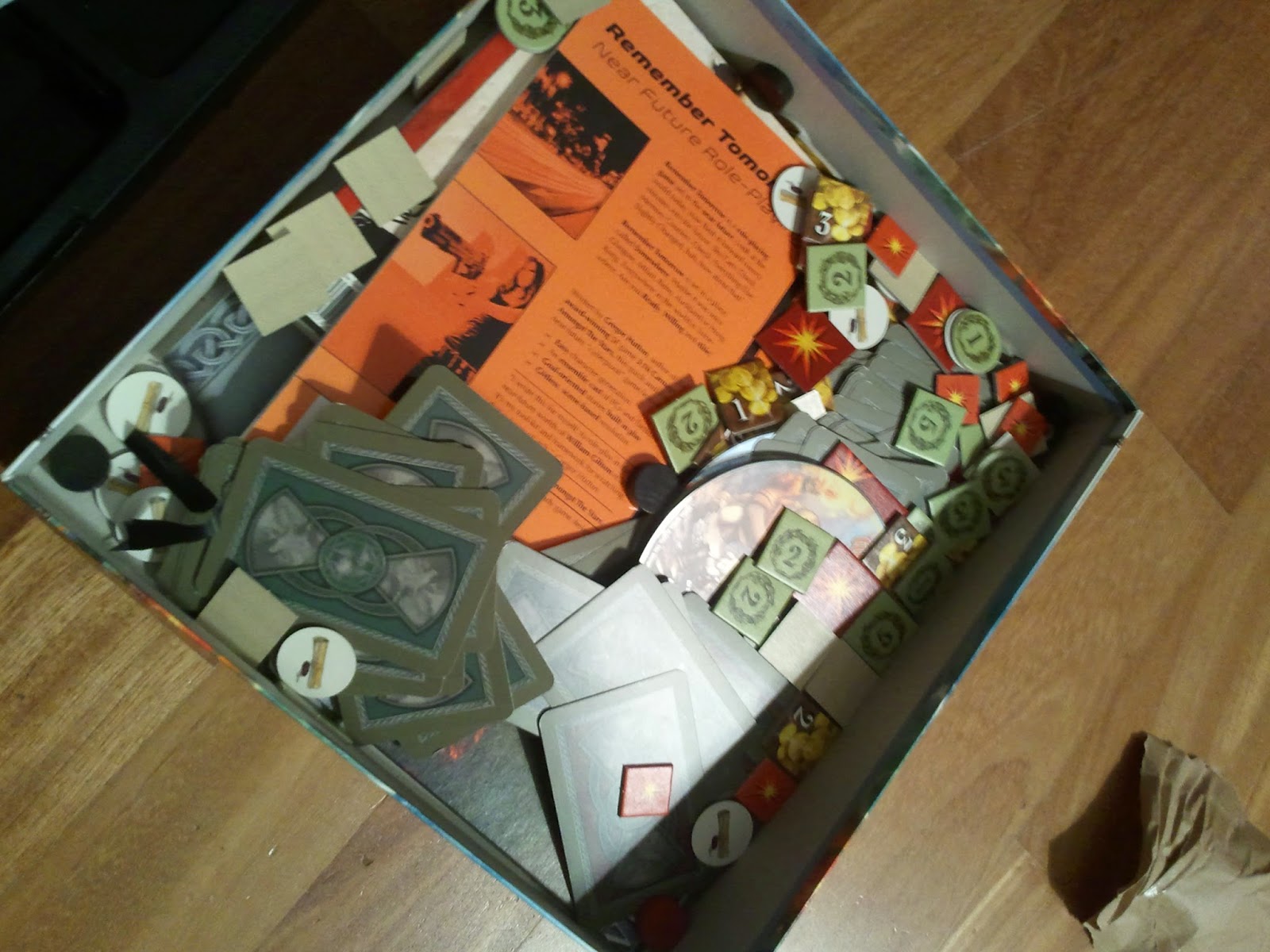 Well, definitely Beowulf, then. Sigh. But hey, look at that! At least it seemed like there was something to compensate for the hatefulness that is Knizia. 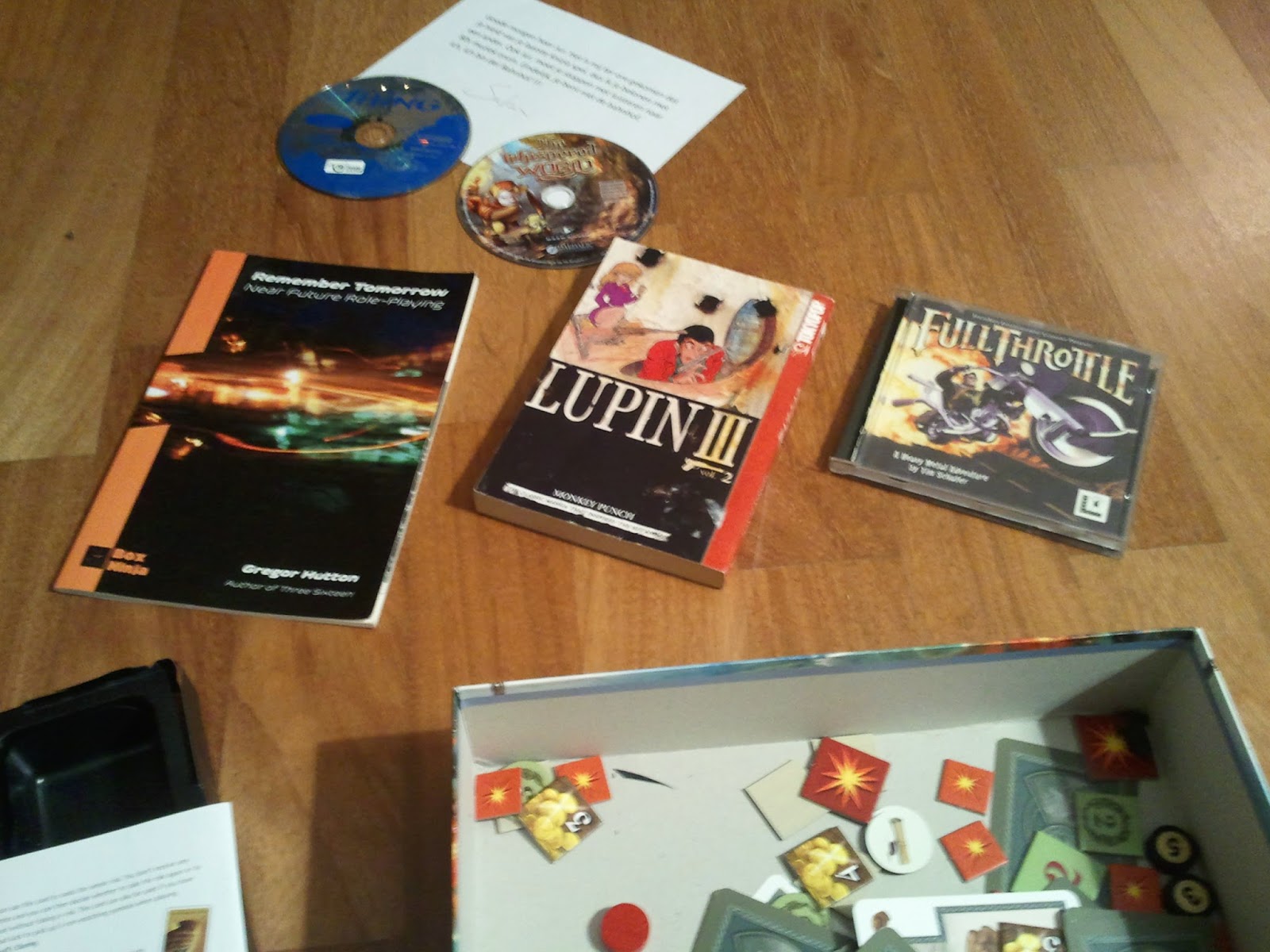 Oh yes! There's a Lupin III comic: Satan knows I love that game! And then there's the Remember Tomorrow near future RPG! Satan knows I love near future RPG! And knows that Remember Tomorrow is the title of the episode of Jonathan Meade's show that I love. Satan is, it bears repeating, a man of wealth and taste. Obviously I haven't been all good this year 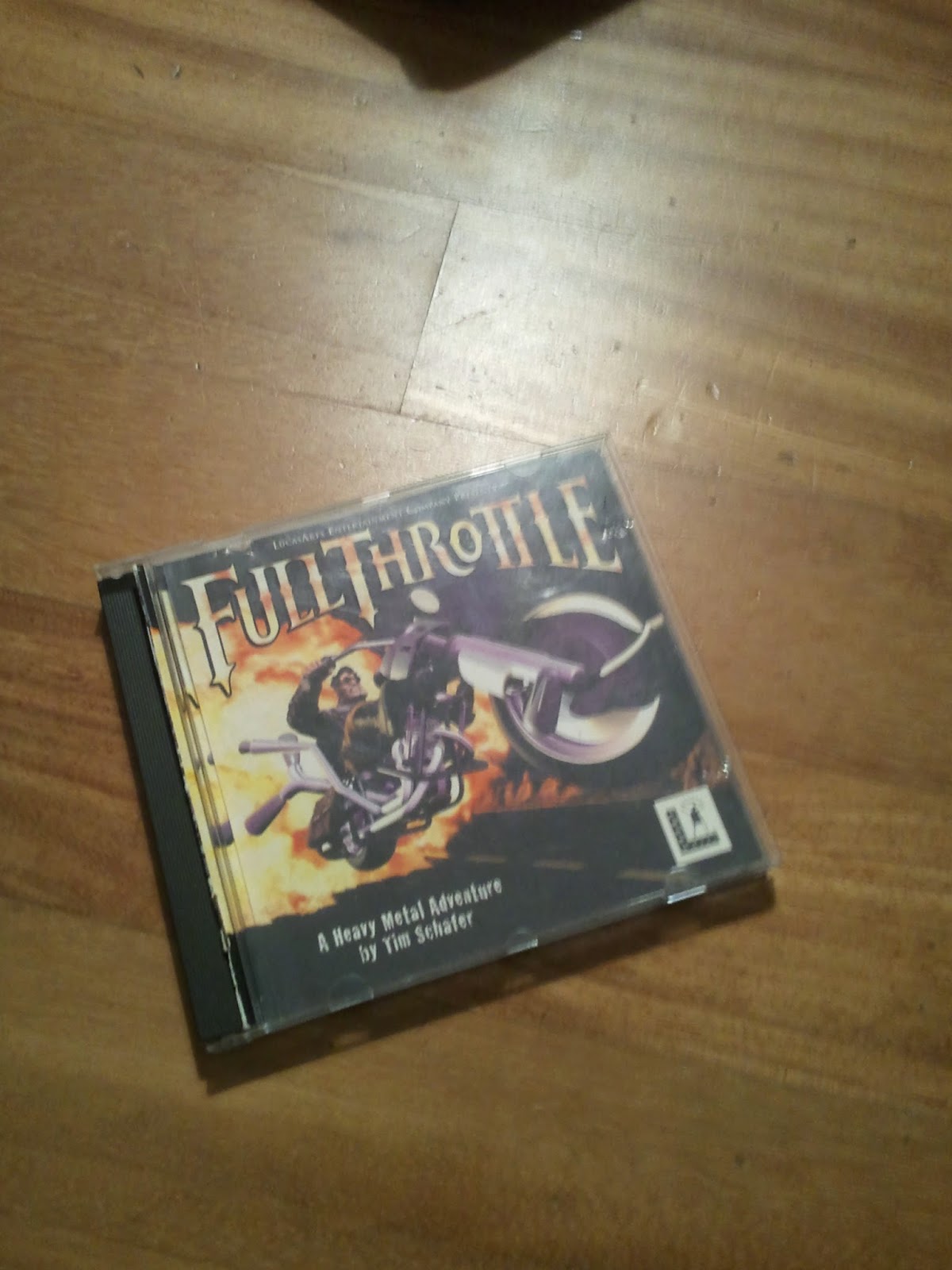 But there was also a reminder of the fact that I've been a good guy. Some computer games, showing that Satan knows I never play computer games unless I'm in between jobs or retired. Full Throttle, The Thing, The Unwhispered Word... well, I guess I'll have to be more of an asshole next year.
Posted by Jur at 14:44 No comments:

I haven't owned a television in over 20 years, which has mostly been to my benefit, but nevertheless I did get to watch some exceptionally interesting things. Strangely this often consisted of late night BBC movies and documentaries. One of my fondest memories is watching this documentary by food critic* Jonathan Meades about high tech architecture in the 1950s to 1980s. I just never knew that you could make documentaries like this.


It's in your face a personal documentary as Meades is shown prominently, rather than as the all-knowing voice over. It's hard not to love his florid pontificating on British architecture and culture. Especially not when he mentions The Sublime in a tone that suggests it's a close friend of the family.


But apart from the half hour monologue, the visual style of weird angles and dead pan humor work surprisingly well. Of course, it only worked because most other documentaries at the time were standard fare. And probably there were many documentaries like this, but I just noticed this one. By the way, where does that intro remind you of?


So, what if you're a wargamer and you've made it this past all this arty farty mumbo jumbo? Is there a message in this for you? Yes, there is. In fact, there's two:

So while you're at your painting table (scoring points for Curt's challenge), have a look at Jonathan Meades (or Adam Curtis for that matter, or one of these documentaries) and let yourself be inspired! This is after all the time of year for retrospection, introspection and reflection. And feel free to share this post so that others are inspired to push the boundaries!