It's been a long time, but I came back to playing The Prince: The Struggle of the House Borgia (sold as Borgia in the Netherlands) last week. The Italian renaissance has a strong attraction to game designers, it combines economic growth with art and architecture and intellectual growth. Princes of Florence, La Citta, Fresco, Leonardo Da Vinci and Medici are just some examples of games combining these elements. And that is ignoring all the games covering the exploration of the world in the same period. 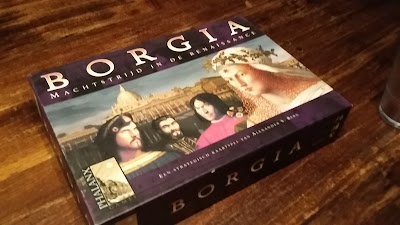 But there's another side to the renaissance that attracts designers and that's the Machiavellian politics. When you want a game that has conflict and backstabbing as well as the above, the exploits of the condottiere and scheming of the renaissance popes offer a good background.

Not for nothing one of the games that takes this approach is named after the Florentine politician and philosopher. But there's others as well: Martin Wallace's Princes of the Renaissance and Borgia. While Machiavelli is a more detailed version of Diplomacy, the latter two games leave the physical map and use cards and counters to portray the expansion of power.

Borgia is the less complex of the latter two games. It plays in three phases where auctioning resource and action cards and attacking each other's resources make up the player's turns. The attacks can always be made on unprotected resources, ie they are not combined with a city. Otherwise it needs playing a condottiere card. They can be defended by playing condottiere cards as well. 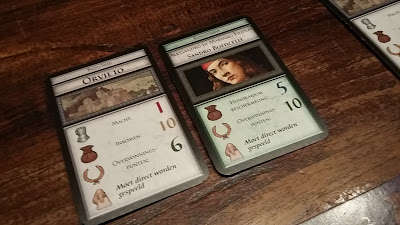 The phase ends when all available cards have been auctioned. Then income is gathered and a papal election held, followed by a point tally. The points come from cities, famous artists and being chosen pope.

What proved interesting is that you can have a fun game threatening other players by attacking unprotected resource cards and then not play a condottiere card, hoping that the other player plays one, effectively wasting it. The downside is that you waste one of your limited actions and get nothing in return. 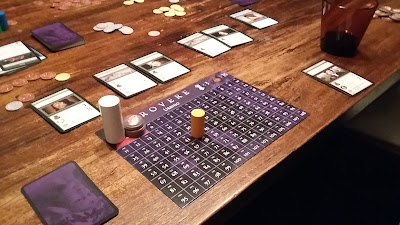 It became a very close run game in the end, with me losing by 151 to 147 points. I managed to take out a very valuable artist from my rival by stealing the medicine card of him first and then playing my plague card.

But he saved his victory by good defensive pairing of his stronger but less valuable cities to his artists and his weaker but more valuable cities to independent families that increased the defensive value. That meant that my condottiere cards were too weak to take them on and sway the game my way,

A sturdy game, but nothing can change my love for Princes of the Renaissance. Not even the fact that I suck at bidding games.
Posted by Jur at 16:00 No comments:

The most thankless job in war

"The rear guard: the most thankless job in war. Risking your life to save that of others. Not seldom it ends in total disaster, without a Chanson de Roland to make you immortal. The best you can hope for is to be forgotten.

Time for some more love for the rear guard action!

I will be taking you through the Napoleonic Wars and in particular the campaign of 1815 using these small but important combats. From the Prussian rear guard at on the morning of June 15 to the retreat of general Rapp. What are the secrets of a successful rear guard action and how to bring them to the wargaming table?"

For the presentation itself, I'm thinking of


Since this is a 90 minute presentation I'm still thinking hard how to make this an interactive experience.

Anybody got further suggestions for this presentation?

Went to see the renovated Egyptian exhibition and the Valley of the Queens exhibition in the ancient history museum in town. Really well done, lovely stuff on display. Text is slowly disappearing from museums, to get people to hire the audio tour, but there is enough to go round.

I'm surprised at the breadth of objects available now and the depth of knowledge that we seem to have reconstructed of this age. The beauty of objects that have remained fairly intact over 4,000 years still amazes me.

Revisited my old friends Bes and Taweret, Egyptians god that were mostly revered in the household as defenders of the children. There were two exceptionally beautiful statues last summer in the British Museum, but these examples are probably closer to what real people kept in their homes.

The Queens of the Valley has some wonderful stuff about the few women that became pharaos themselves, about court life, the workers that built the monuments in the Valley of the Queens and the burial site of queen Nefertiti.
Posted by Jur at 15:59 No comments:

The Dutch army under Napoleon

Also in, this great book on the Dutch army under the Kingdom of Holland. This period was the last step between the foundation of a Batavian revolutionary republic under French protection in 1795 and full incorporation into the French empire in 1810. 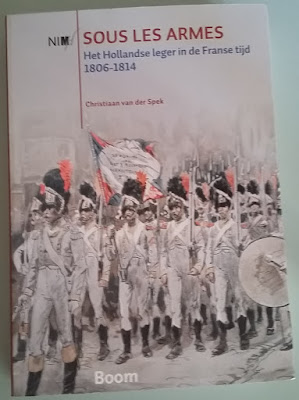 With Napoleon's brother Louis put on the throne in 1806, the country seemed already well under French control. But Louis' genuine considerations for the interests of the Dutch people ensured that neither Napoleon was satisfied nor the Dutch.

Given Napoleon's focus on the military contribution of the Dutch to his overall war effort, the army was always going to be a breaking point. Louis' four years in charge failed to bring a balance between Napoleon's demands for a bigger army and the Dutch ability to pay for expansion and provide the necessary recruits.

Which is why Napoleon finally decided to be done with and independent state.

Christiaan van der Spek looks at the Dutch room for manoeuvre in military policy during independence, and also to which extent the Dutch maintained a separate identity, first within the French sphere of influence and later within the empire.

Will be an interesting read.
Posted by Jur at 16:00 No comments:

Played a second game of Wir Sind Das Volk last Friday, this time as the Ossies. The game is quite unforgiving of mistakes on the East German side as it causes a cascade of negative effects at the end of a decade. 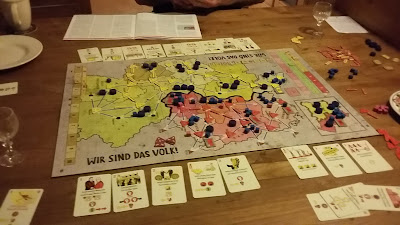 Refugees and police state all degrade your economy, then pull the foundations from under your living standard, which in turn degrades your industry. This means you really need to play the East very conservatively, because the cost of having to rebuild again is aggravated by the fact that your maximum is reduced, making you weaker in the long term. And the opportunity cost means that you lose the ability to put pressure on your opponent.

Needless to say, I got my ass kicked again this game. I'm still not 'getting' it.
Posted by Jur at 16:00 No comments:

The politics of Native American warfare

Native American warfare had a different context to it than than the modern nation state and of the colonial powers that it faced. Given the extreme fragmentation of political power, the kind of unified effort that the British crown or even the fledgling United States were capable of was way out of reach for the tribes.

Even at the level of the tribe power was decentralised. Each warrior was largely independent in his actions and although they could submit themselves to war leaders, there was little formal power to enforce their co-operation. It could take days to work towards some level of consensus, but there was no guarantee that all able warriors would join in an endeavour.

The mirror image of this was that even if the community chose peace, individual warriors (the “young and irresponsible”) could still continue raiding. For young warriors, warfare was the best opportunity to manifest themselves and gain acceptance and status among the adults. The result was that Europeans, with their experience of hierarchic society, assumed the leadership could not be trusted and that low level conflict could escalate against the majority’s wishes.

There is some danger in generalising about political organisation of Indian tribes, as there was a wide variety. Within certain tribes political power was divided between peace chief and war chiefs. Also in some tribes, women had considerable political influence, joining in the political deliberations.

We also have to consider that tribes were generally quite small. Their warriors were counted in the hundreds, suggesting that most tribes numbered less than 5,000 men, women and children. We’ll come to the economic consequences of this later, but to assemble a significant force to oppose the more populous colonists, tribes needed to co-operate.

Given that the tribes often had their own languages and customs, tribes considered themselves as distinct as European nations. There wasn’t a natural overarching feeling of shared interest between the tribes. Tribes were determined to control their own destiny.

Even an informal hierarchy between the tribes was often lacking. The only major exception was the semi-permanent alliance of the six Iroquois tribes, and they extended their dominion over other tribes in the early 18th century, notably in the Ohio territory.

Movement over wide distances also prevented fast decision making. To gather all delegations from all relevant tribes, sometimes appointments would have to be made many months in advance to meet at a prearranged location.

And then the same time consuming deliberations took place as at the tribal level. All this made co-operation between the tribes a complex and time consuming process.

But the most powerful dynamic was the colonial rivalry between France, Britain, Spain and later the United States.

At the earliest stages of colonisation, the traders and settlers had been dependent on Native Americans offering their goods for trade and support for marginal settlements in a harsh environment. The Europeans had useful goods and knowledge to offer as well, so that relations tended to equality and mutual benefit. They could also make useful allies and tip the balance in war between the tribes.

But as empires clashed from the early 18th century, the roles started to reverse and Indians became auxiliaries to colonial forces. Their support was bought by gifts of strategic goods like guns and ammunition, but also status goods like alcohol. Indian tribes became increasingly dependent on these goods.

Even at the most basic level could colonial rivalries tear tribes apart. Those that controlled the entrance of gifts into the tribe (in some cases the war leaders that had most contacts with outsiders) gained power.

Of course, the fragmented authority had similar consequences for the colonial powers trying to gain Native American allies or to make peace. Negotiations were long drawn out affairs in which hundreds might participate.

The colonial dynamic came to affect the intertribal relations as well as tribes were forced to take sides in imperial wars. The Iroquois confederation lost its dominion over the Ohio tribes during French and Indian Wars and then fell apart during the American Revolution. It never recovered from internecine warfare as those loyal to Great Britain retreated to Canada.

And choosing the wrong side would have harsh consequences. Land would have to be ceded which meant that the tribe became even more dependent on gifts. And with the disappearance of first France and then Great Britain, tribes lost the ability to play off suitors against each other.

By the end of the 18th century therefore large alliances seemed the only hope to retain independence and land, while the more pessimistic advocated peaceful accommodation to delay the inevitable. Both the 1790-1795 and the 1811 wars saw coalitions of unprecedented numbers of Indian tribes.

But in many cases the rifts by then ran through the tribes. And as long as the Indians couldn’t all decide on one course, both strategies worked against each other.
Posted by Jur at 11:35 No comments: