And yet another forgotten colonial war

Even when I was young, we didn’t play Cowboys & Indians any more and Westerns have declined as a movie theme. But despite the relative neglect, the Indian wars remain a fascinating colonial conflict. 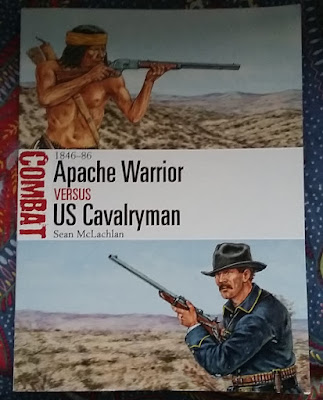 By the time the army took on the Apache tribes in the middle of the 19th century, the issue was no longer in doubt. The demographic and industrial weight of the totally overshadowed that of the hunting and farming Apache who number in the tens of thousands.

This was a war of relatively small battles, neither side bringing more than several hundred combatants to the fight. However, each Apache killed had long term consequences for the survival of his tribe, while there was a steady flow of new recruits for the cavalry.  At the same time, expanding settlement reduced the hunting grounds on which the Apache depended, thus forcing them into raiding.

Nevertheless, the struggle was a long and bitter one, which could only be brought to an end by employing Apache versus Apache. This although the cavalry itself made significant strides in its counter guerilla capabilities. Equipment and tactics were adapted to the climate and Apache warrior society.

Likewise the Apache adapted to the western world, improving their weaponry, and finding ways to sabotage telegraph communications. They also used their superior knowledge of the terrain to move and live undetected.

The only way to really get at them was to use scouts from rival tribes. There was little sense of common cause between these tribes and for many warriors the opportunity to stick to their warrior lifestyle, plus a gun and free meals, was too good to be missed.

McLachlan does an excellent job using first hand accounts from both sides to illustrate the challenges that both sides faced and how the social-political dynamics of the Apache and white settler society made conflict inevitable. The narrative flows well, the analysis is crisp and the illustrations fit the narrative. Probably the best Osprey book that I’ve read on ‘non-western‘ armies.
Posted by Jur at 15:35 No comments:

Got a bit frustrated with my lack of reading lately and so decided to take on some lighter stuff, and Ospreys have proven excellent in that regard. Easy to pick up and lay down on the commute. 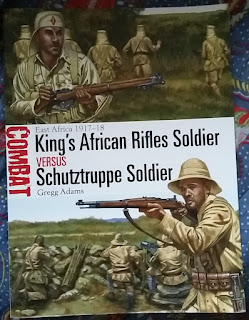 First off was King’s African Rifles vs Schutztruppe, continuing the theme of forgotten colonial wars. Not a middle of the military history road subject. First of all it deals with an African side show in World War I, when troops from British colonies tried to conquer the German colonies. And secondly, it prominently features the African soldiers fighting the war.

And compared to most Osprey books, there is more information on the non-western protagonists. It is made clear that in the British units, with fewer white NCOs, more responsibility devolved on the black NCOs especially when the (always white) officers became casualties.

And the author very cautiously treads the subject whether having more European NCOs was better for battlefield performance. There are even a few passages from the memoires of black participants.

On the other hand, in the operational narrative, the perspective of the black soldiers fades into the background. The prime actors there are the natural environment dictating the tactical and strategic decisions made by white officers. And you can still wonder how the askaris felt about fighting a colonial war.

On all the other elements the book score above average. It does a good job of explaining the challenges of bush warfare in southeastern Africa and the differences in British and German policies towards war in . Also, the operational narrative is clear and highlights the most important factors which are brought together in the final analysis. Special kudos for the illustrations, which are very well integrated into the narrative, reinforcing it with examples.
Posted by Jur at 12:23 No comments:

This is a very nice book on a forgotten colonial war that the started without good reason and only ended with the arrival of a new colonial power, , in 1942.* 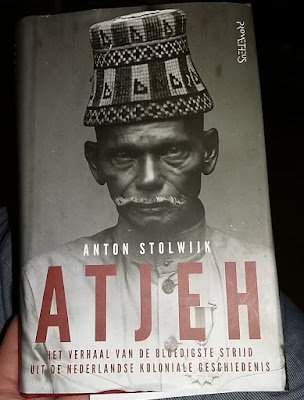 From the first unsuccessful invasion in 1873, through the bitter decades of guerilla warfare to the anticlimax in 1942, Dutch colonial administrators and military struggled to bring an end to the costly occupation of a region that just would not submit, even when all hope seemed gone.

As the Dutch brought more power to bear, the resistance dwindled from a full fledged army defending the sultanate to desperate attacks on individual soldiers and bureaucrats. And as the Dutch sent their columns deeper into the hinterland, all of Aceh was marked with destroyed villages and hasty graves for freedom fighters and their pursuers.

The coming of the Japanese didn’t improve the lives of the inhabitants of Aceh, nor did their struggle end with Indonesian independence. And even though peace has reigned since almost a decade, Aceh is still a poor and neglected part of .

Stolwijk, who lived in Aceh for 18 months between 2009 and 2015, gives a sympathetic view of a society trying to overcome the painful present, while keeping alive the ghosts from the past. His anecdotes of interactions with former guerillas and collaborators, students and officials (who seem genuinely pleased that somebody takes an interest in the history of their building or train line) both provide comic relief and perspective.

*full disclosure: I’ve played a few games of football with the author and I think he’s a nice guy.

Fascinating book. Most of the women in this book were highly dedicated to Hitler and his ideas. Magda Goebbels married the 'next best'. They paid a high price for their dedication after the war: destitution, imprisonment, even life.* Yet, several of them defended the Third Reich onto their dying bed. 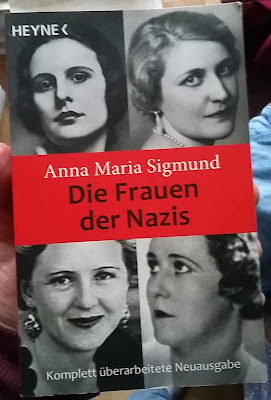 The book gives a peek behind the scenes of the Nazi party. The stories of Geli Raubal, Hitler's favourite niece, and Carin Göring, the Swedish aristocrat that left her husband for Hermann, provide insight to the workings and social sphere of Hitler's entourage in the Kampfzeit, ie before the Nazis came to power.

It shows that the Nazis were human. Göring was a true romantic, whilst Goebbels was an adulterer with a penchant for adoration and self doubt. Even Hitler felt a moral obligation to take care of Eva Braun after suicide attempts, and although he ordered her to stay out of sight when foreign dignitaries visited the Berghof.

None of these women held any personal power. Women were considered unfit for the political sphere in Nazi ideology. Despite the huge services rendered for the party by benefactresses in the Kampfzeit, their opinions counted for little. Even the staunch Nazi organiser Gertrud Scholtz-Klink, in charge of the party (and later state) women's organisations, never actually got to talk to Hitler.

So all influence these women had was through their men. Whilst Emmy Göring and Henriette von Schirach slowly faded into the background as the influence of their husbands waned, Eva Braun slowly increased her hold on Hitler's private life.

Is there a lesson in these stories?