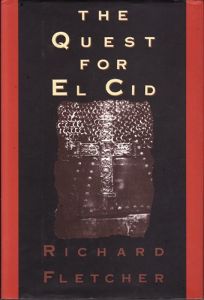 After a year of almost exclusive focus on Napoleonics I am now returning to the promiscuous reading selection of old. One of the books I had been saving up for this moment was Richard Fletcher's The Quest For El Cid. My interest in The Leader was aroused by my visit to Spain two years ago.

The age of El Cid was a fluid one, with disintegration of the old Muslim Caliphate into successor states that were unable to maintain themselves against Castilian expansion. So many of them became dependents, riven apart by internal struggle to be exploited by rising Christian states in the north. However, those fought amongst themselves as well.

Christians, Jews and Muslims lived among each other, just like Spanish born were mixed with Arab and Berber immigrants and descendants. Not that it was a multicultural paradise, but at least a period of relative tolerance (see my discussion of that topic earlier on this blog).

But that was about to change during The Cid's lifetime. On the one hand hard line Christians were starting to build a vision of reconquest, while from the North and South of the Sahara the strict Almoravid sect made rapid progress toward the Mediterranean.

The Cid was always more his own man than a courtly insider after he lost his royal patron early in life. He wasn't particularly liked and easily made enemies, but his skill at leading troops made him very useful to the leaders of his age. He served the king of Castile but also the Muslim leader of Zaragoza. And late in life he primarily served his own interest, capturing Valencia to rule himself.

In the last chapter Fletcher shows how the legend was built on this, partly from a need to attract pilgrims in monasteries and later from a need to build a reconquista ideology, and finally in the modern ago, the need to create a unifying myth for Spain.