With Essen 2014 fast approaching, I can draw up the result of my self imposed Essen 2013 challenge. What games did I manage to play that I bought there? 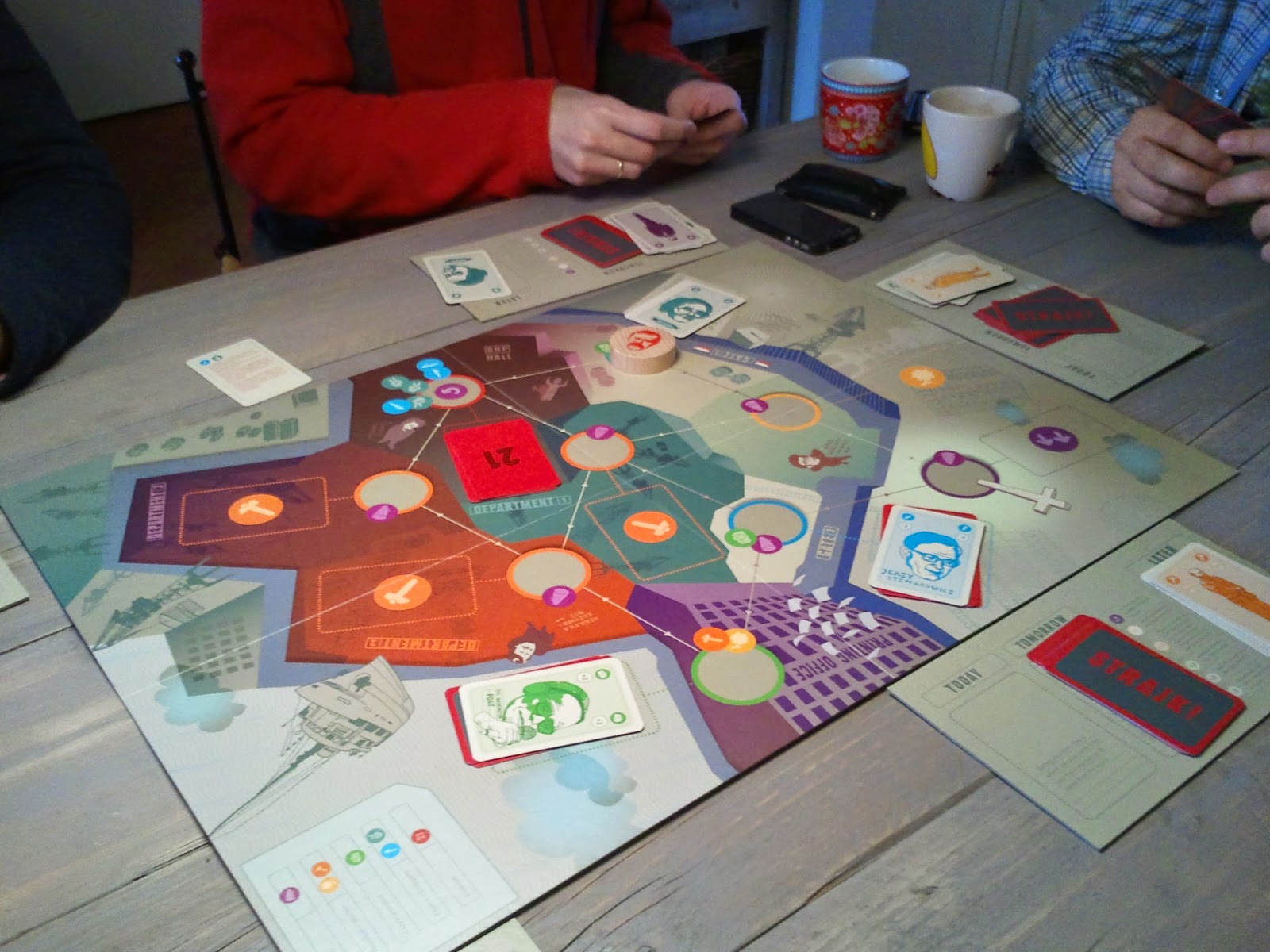 Which means I have actually managed to play all four games I bought, but only just in time. These weren't the toughest games to learn, so you can see how hard it is for me now to make the effort. But I can go to Essen knowing my hands are free to buy games.

But the sad story is that the past few months, I haven't played many games. Only 5 since the end of June. Apart from Sigismundis Augustus there were the familiar Civilization and Battlestar Galactica. I learned the Game of Thrones card game I had bought for Died's birthday. Newly bought Pathfinder was also good, but doesn't really count towards my NYR because it wasn't my copy.

In terms of getting 13 unplayed games from my collection to the table this year, I'm now at 7, so behind schedule.The sterner among you (and who can remember the New Years' Resolution) will note that I also played Eight Minute Empire, which although I didn't buy it at Essen was also mandatory to play before the deadline. 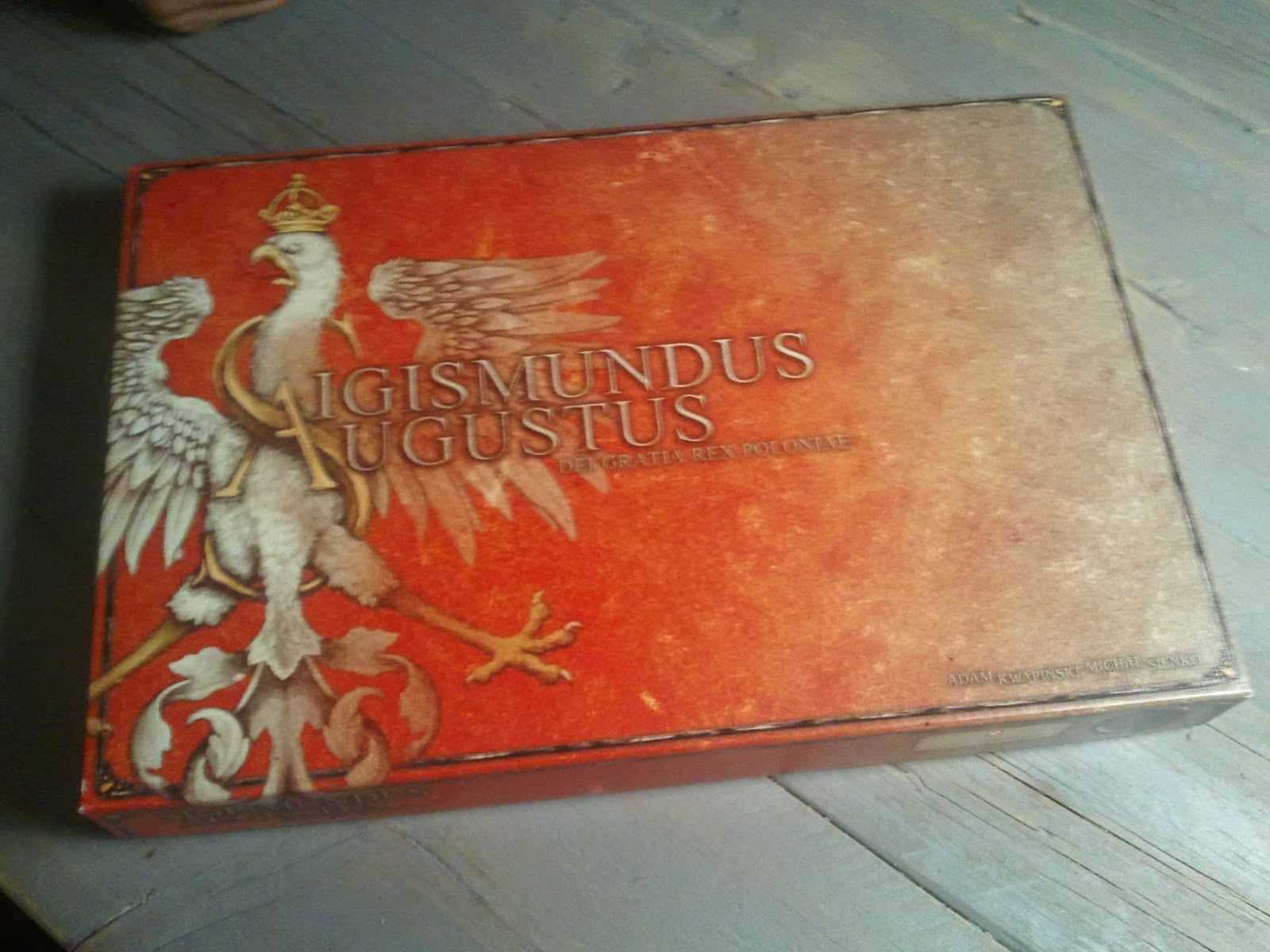 King Sigismund of Poland was best known for his acquisition of Lithuania by the end of his reign, while Poland itself in the early modern periode is best known for its chaotic politics. It is exactly the latter part of history that this game focusses on. Players are powerful families within the Polish Diet (Sejm), vying for the most profitable offices (governors, ministers, clergy).

The game is won on victory points, for the most part derived from holding offices or from diplomatic relations with neighbouring states like Moscovia, Lithuania and Austria. There's three important phases in the game: the policy, the action and the Sejm phase.

In the policy phase, players can play one policy card. The cards allow you to attack another player,
Perhaps the most important action is to activate a neighbouring state so that it will be scored at the end of the turn. In the foreign policy phase each player can at least place one token on a neighbouring state. The VP are scored by the player with the most and the second most tokens on this state. 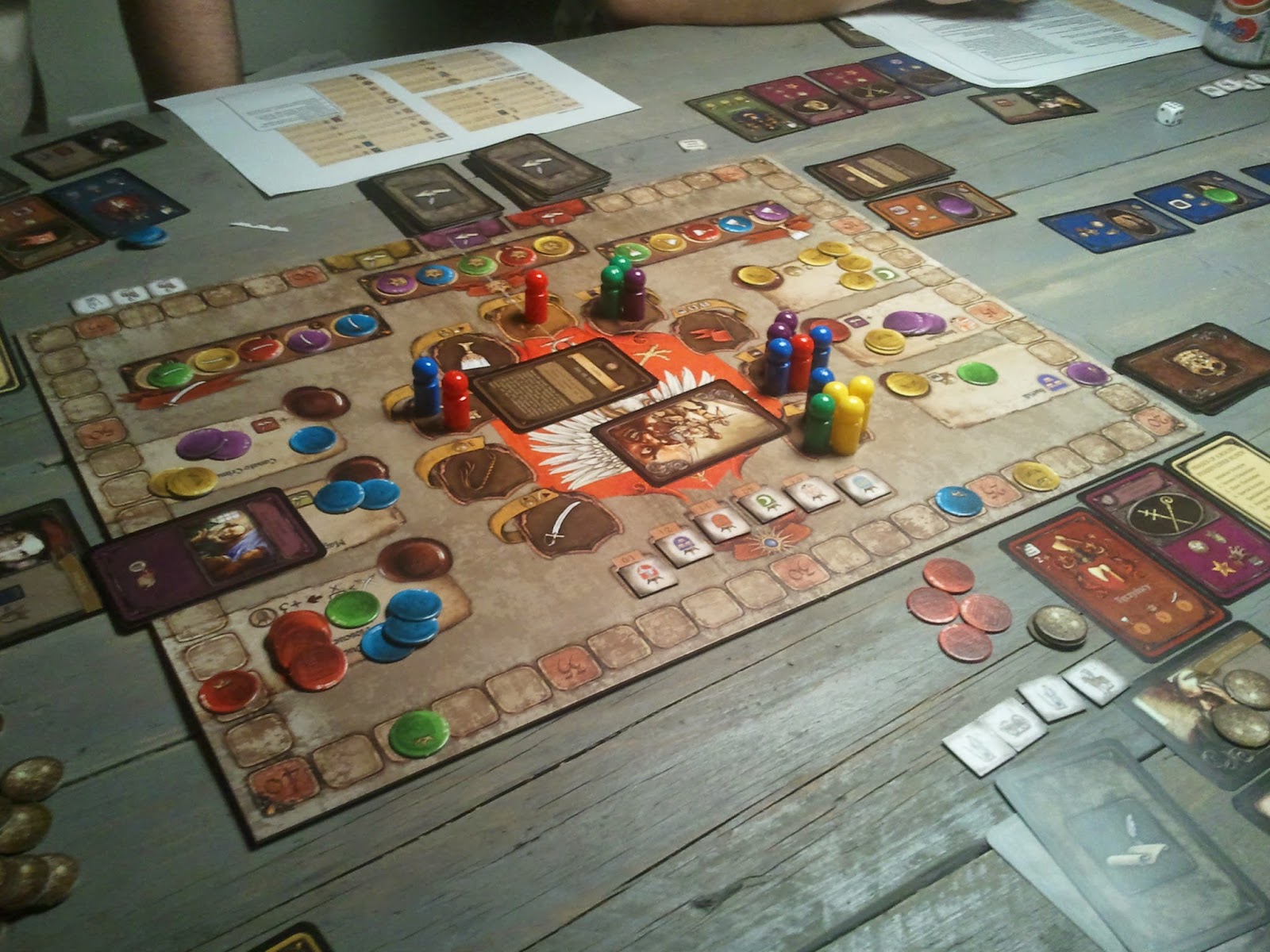 The action phase is based on worker placement. Each player has at least 3 clients to take actions like taxing, diplomacy in a neighbouring state, gain influence among the nobles or magnates or make an office available to bid upon in the Sejm phase.

There is another randomising element to the game in one of these actions: the deck of Polish characters from the age. These can be enlisted by the players for their direct advantage or victory point bonus at the end of the game. Since the deck is much larger than the amount of cards drawn in a game, this helps increasing replayability. 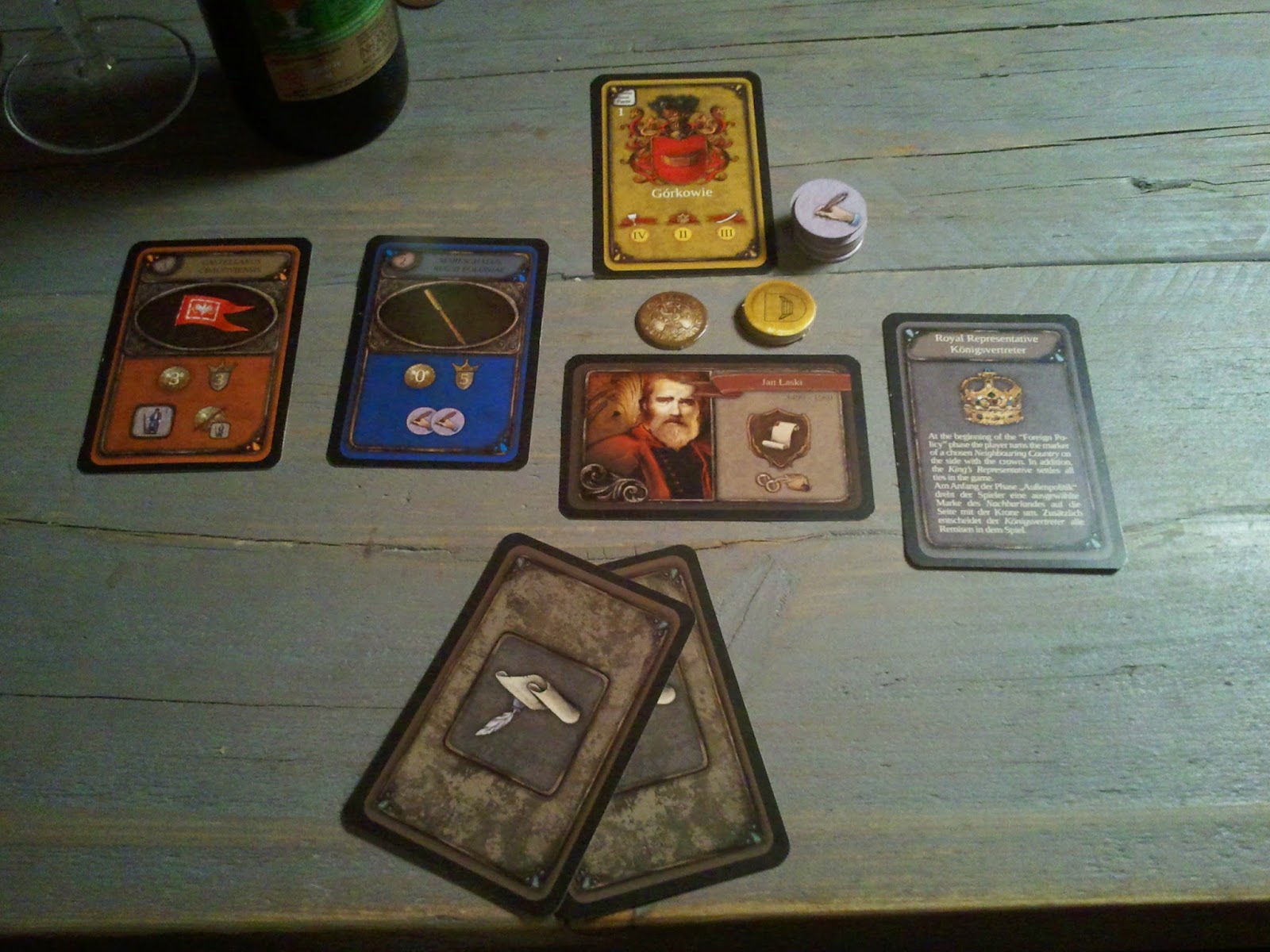 The Sejm phase is the heart of the game, although it doesn't hand out any victory points. It starts with collecting the votes you can cast from your position on the noble, magnate and royal support tracks. Some ministerial offices and discarded internal policy cards offer extra votes. Next, players can blindly bid money for votes, and then blindly bid votes to sell. The highest bid of money is exchanged for the highest offer of votes and so on. A neat mechanism.

Players first vote on each office that has become available. Next, the Sejm commits itself to fulfilling the royal demand. The king desires money, troops or just votes. Again all players bid blind. This determines the amount of royal favour (ie votes) for the next turn, with the player spending the most resources becoming the king's favourite which gives you the valuable right to decide on all ties.

Finally, each turn after the first, the players also vote on a piece of legislation, which changes the game rules, for example restricting the number of offices that can be held. All votes here are open and players just indicate whether they agree or disagree with the proposal.

The turn the ends with the scoring phase and the upkeep of the troops.

First impressions a largely positive. In one game, we found it hard to figure out clear strategies. There's so much happening that it seems hard to focus on one aspect. But the mechanisms feel to have been integrated well.

One odd thing is that in the last turn several parts of the game lose their meaning. There is no reason to worry about the upkeep of your troops, or even to fulfil the king's demand, as the result has no effect on the game.

It is not an easy game to learn. The rules are written pretty densely, there are a lot of mechanisms that tie into each other and how this works out only really become clear by playing. But it is worthwhile. Leave it to Polish designers to integrate euro mechanisms with historical themes. I'm pretty sure we will have another go at this one.
Posted by Jur at 16:00 No comments:

Well I was supposed to get rid of games rather than acquire new ones, but I had time stacked against me. Yesterday I received Won By The Sword, a GMT game on the southern German campaigns of the 30 Years War. 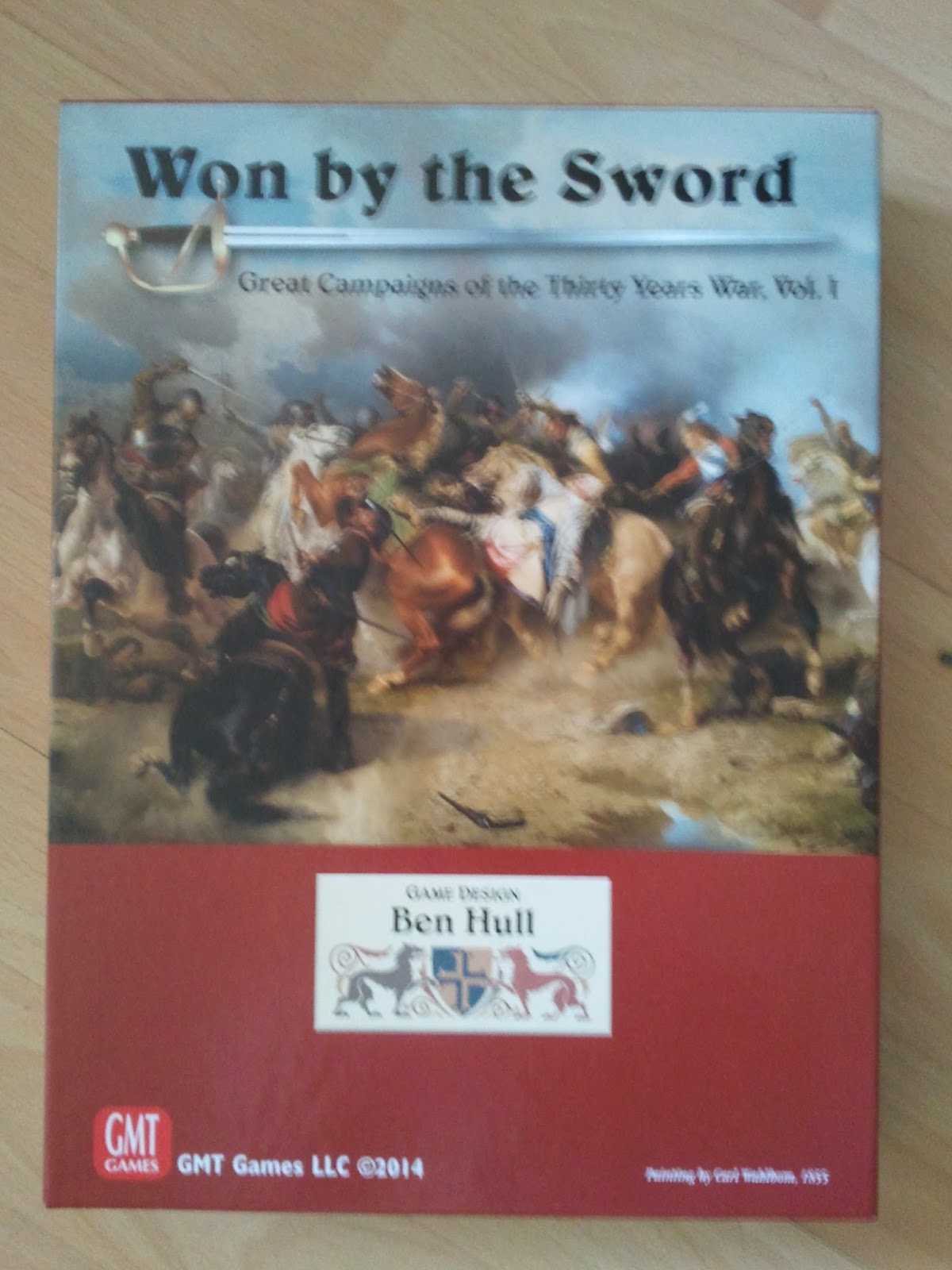 I had pre-ordered it so long ago I had actually forgotten about it until I got a note saying my credit card had been charged. No disappointment really, because what I've seen of it so far bodes well. The game is of medium difficulty so I could get it played reasonably easily. And I'm looking at it from the point of playing double blind. Perhaps...


Also, earlier this month I got my share of the inheritance of Frank van den Bergh, who died almost two years ago. His books and games were auctioned to raise money for a charity of his choice. So last year I bid with a good conscience and I don't count them towards my non new games limit.

A good moment to remind you all that if you have a large collection of miniatures, books and games, it might be helpful to have it sorted out and catalogued before you die. I've seen several cases over the last few years where the execution of wargamers' inheritance became a task involving months of work for remaining friends (also see Chris Stoesen's and Bob Cordery's experience ). On the other hand, it will make sure you'll be remembered, if not always positively.

Of course, knowing that this was coming up made it easier for me to be strict on the No-New-Games-This-Year (except Essen) resolution.
Posted by Jur at 12:11 2 comments:

And with Essen nearing, I've made my first draft of the list of games to look at.

Some interesting stuff like 15 Dias, which is about my old friend the Conde-Duque de Olivares, or a game looking at the logistics of the Normandy Breakout. New stuff from Martin Wallace and Phil Eklund, a rondel microgame, more Polish military history.

And one game that sounds just to strange to be true. The Walled City: Londonderry & Borderlands has you populate villages 'with loyal peasants and nobles who share your view of this new city'. This means: Protestant settlers in Northern Ireland in the 17th century, so a highly contentious part of history. This might not go down will with (Northern) Irish catholics who understand Londonderry as a Protestant colony. Let's see if the game shows that sensitivity.

I was afraid I would be a bit meh about Essen this year, having been out of the gaming loop so long, but going through the new crop has wet my appetite.
Posted by Jur at 10:01 2 comments:

Possibly the best introduction on the 1814 campaign in France available. Combines:
1. a good overview of the political and military events of the campaign from the French and allied perspective
2. reading list which includes both the major scholarly works as well as the primary sources
3. short extracts from memoirs and letters to bring it all to life.

Because of its reading suggestions, it is also very useful for the whole late Napoleonic period as many books mentioned cover more than just the 1814 campaign.


This one is about equipment, such as gliders and glider landed heavy weapons; the organization of glider borne units and pilots; and finally an overview of operations. Nothing on planning though and little on lessons learned.

Decent Osprey in the tactics series. First part handles the equipment and procedures for bridge building, from rope bridges and rafts to Baileys. Second part handles contested river crossings, both defensive and offensive.

The drawings and pictures are very useful as engineering equipment does not often get so much pictorial attention: it really helped me to see the Bedford folding boat lorry to understand what a bridging column must have looked like.

Another great boon is the list of planned airborne operations in the summer of 1944.