This is my blog and I brag if I want to


The last couple of weeks have been very nice. It all started with the presentation of the book in the Rijksmuseum, together with an exhibition on the battle. I had so many friends and family around it was amazing and I lacked the time to talk to anyone for a sensible time. Not the least because Isabelle was tugging my arm constantly to catch the autographs of my co-authors. But for me it was wonderful to be in the centre of attention. Read a report by Dutch national broadcaster NOS and view the pictures taken by newspaper Parool.

There have been a number of appearances on Dutch radio and TV:
Ben on Nieuwsuur (June 18th, after 17 minutes)
Me on OVT history programme (June 14th)
Jeroen on TROS nieuwsshow (June 6th) and on Een Vandaag (May 25th)

And we ain't done yet

An article by my hand will appear in the next issue of Mars et Historia, a Dutch magazine on military history, somewhere next month. And I went out on June 19th with a camera crew for the Dutch ironic society programme Hoe Heurt 't Eigenlijk? with dandy presenter Jort Kelder, who proved to be a bit of a history buff. I was bombarded with questions for almost 6 hours straight (except when they were interviewing the Prince of Orange and a few others in the Waterloo bivouac), even when the camera was off. Due to be broadcast somewhere this autumn.

There will also be a number of public lectures, with me appearing at Donner book shop in Rotterdam in October.

Shape of things to come

I'm sure you're all waiting for news on how the book has been received etc. This is coming soon but it has been bussyish. However, I managed to buy a spray can and apply some paint.

Yes those are 28mm Prussian Landwehr. And a few Musketeers. Summer project. 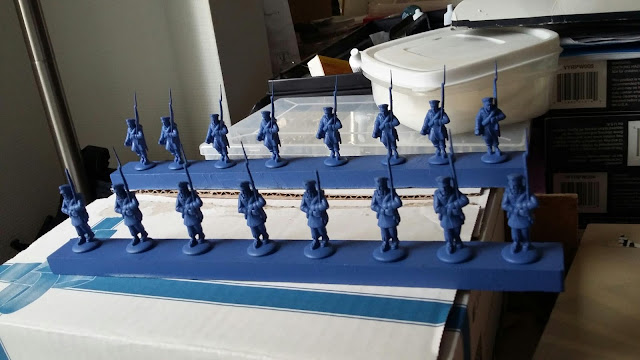 A Heartfelt Thanks To You All

I try not to pat myself on the back here too much, but today was a day that brought me enormous satisfaction: I received the first hard copy of the Waterloo book.

Just holding it sends a pleasant chill down my spine and brings a big smile to my face. It feels good, it smells pleasantly and the quality of the illustrations is really good. Even the flat water colours come off admirably. 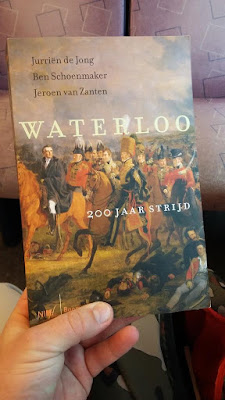 The past months have not really been frantic, and I've been through tougher publishing processes, but this is much more *mine* than anything previously. Even if I did it with two other guys, who were very good to have around. Co-operating with Ben and Jeroen has been a real pleasure. Their experience saved me loads of time and took away a lot of potential worries.

And somehow it all fell into place. Our chapters linked up with hardly any overlap, our writing styles meshed and the structure afforded by taking a time and place as the starting point of sections of our chapters worked out as well as might be hoped. It is one book, not three parts.

This also a good time to thank a number of people who provided help during the production of this book: Paul Lindsay Dawson and Stephen Summerfield who gave me access to cutting edge literature and together with Erwin Muilwijk and a number of other regulars on internet fora gave me a good idea of where to find the best current research. Jenny Gierveld, Herman van der Haegen, Michiel Schwartzenberg, Arjan de Jong, Barbara Mounier and Jan Kees Mol gave very useful feedback on the text at several stages. Egon Dietz, Mieke Mateboer and Lona Verkooijen made it possible for me to take four months of leave from work. And last, but certainly not least, Kaj Wijmans should be thanked for turning a switch in my head.

And I want to thank all of you: facebook commenters that sharpened my arguments, colleagues that kept asking when the book would be finished, friends that forgave me when I cancelled appointments, family that had to cope with me staring at a screen late at night, and all of you for showing interest and providing encouragement. It meant and means a lot to me.
Posted by Jur at 21:33 6 comments: