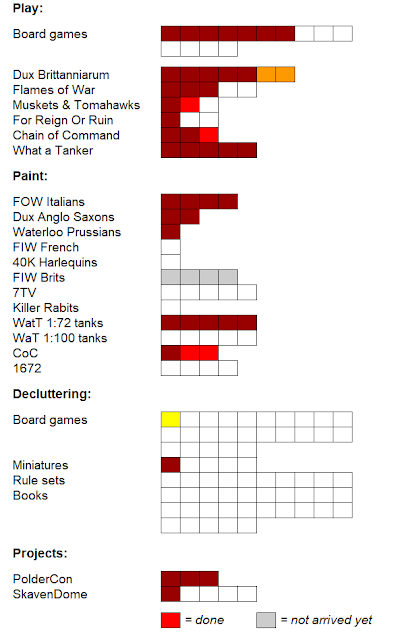 A bit more modest month in terms of gaming goals.

Started a TooFatLardies pint sized campaign on the 29th Division pushing inland from Omaha Beach after D-Day using Chain of Command. I was able to achieve my objective, mostly by whacking every German that stuck his head up. It won't be so easy next time, I'm afraid.


And later I staged two introductory games of Muskets & Tomahawks. The first I only umpired, the other we played, mostly making up our own scenario around the canoes provided by my opponent. It looked fantastic and the liberation of captured hostages provided an interesting dynamic. But not sure the amphibious rules are the best part of M&T.

There was some fun boardgaming as well, but not the ones on my to do list. I'll have to prepare better to get them on the table.

My friend Dick had assembled a number of artillery guns for me from our SHQ order, which I immediately set out to paint. I also painted up the TooFatLardies jump off points.

And a 57mm AT gun that I ordered from Grubby Tanks, from which I ordered my WW2 Americans. I can't recommend them enough. 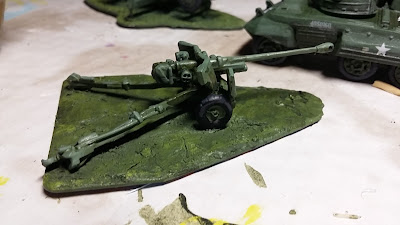 No stuff out of the door, but bringing in a new IKEA Ivar allows me at least to stack up my army bags rather than leaving them on the ground. Cleaned up my hobby table as well, so I can actually work on it again. 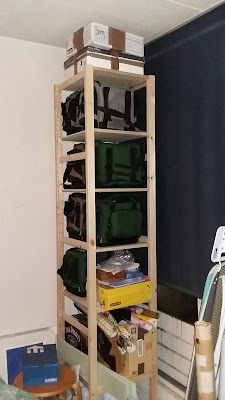 A fair bunch of hills from Total System Scenic came in, but I haven't gotten them on the table yet.

As you can see, a lot of Chain of Command stuff. Also guiding my reading. 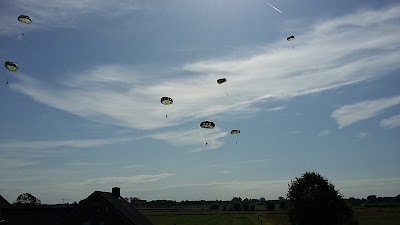 But I've also been distracted by WW2 commemorations, such as the one at Arnhem. To come in October: Battle of the Scheldt and the liberation of Noord-Brabant.

Hardly any progress on the 1672 front as I try to get other stuff out of the way and think about the way I'm going to paint them. I have no set system yet, although I was reasonably happy with Army Painter.  But with the French grey uniforms, I'm wondering if that's the best solution. GWs contrast paint looks inviting too. So I've been testing different washes and varnishes on white and grey base coats. Not settled on a method yet, though.

And there is yet a new project popping up: a TooFatLardies day in Arnhem for October 2020! Might organise itself to a certain extent, but it will need a venue and some financial arrangement. Stuck my finger up.